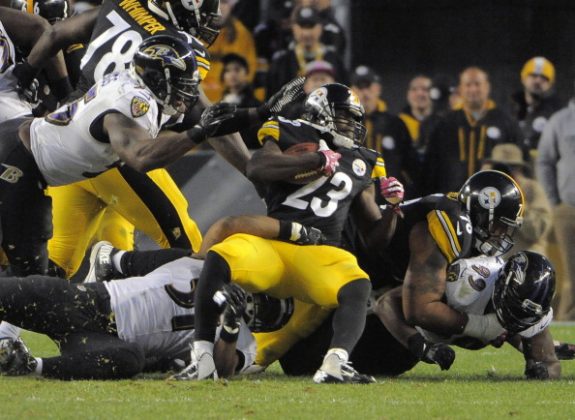 The Steelers are 2-4 after a huge win over the Ravens Sunday, and now can look truly ahead with two wins on getting the season back on track.

Today we look back to yesterday and give out some grades from the big 19-16 win.

Offense: The team finally seemed to have a flow on offense Sunday, more so early in the game and late, when it matters the most. The early points gave the crowd and defense a lift, and it seemed to give energy to everything in the stadium as the crowd was into the game all afternoon. Ben Roethlisberger didn’t throw a pick, and the run game was the best it has been in a long time. Le’Veon Bell fed off a solid effort from the offensive line, and the wide outs did their job with a big effort late from Antonio Brown. About the only poor play was the Heath Miller fumble late in the first half. Overall, the best effort of the year. Grade: B

Defense: The Steelers D went 8 quarters before finally the Ravens were able to put it in the end zone with two minutes left to tie the game at 16 before the Steelers offense went down and won it. They allowed 287 total yards to the Ravens, but were able to clamp down when it meant the most, which was the key. They got to Joe Flacco often, and despite the TV talking heads saying the Steelers don’t have much of a pass rush, they showed it with LaMarr Woodley playing his best game in about two seasons, getting pressure on Flacco all day. The run defense was solid, and while Baltimore ran for 82 yards, they only had 3.2 yards per rush. They there was Troy, doing his usual stuff out there, playing all over the place, and making Flacco think twice before throwing. They need this type of effort every week. Grade: B

Special Teams: The club nearly had a kickoff return for a score when Emmanuel Sanders took back a kick for a score after the Ravens scored a TD to tie up the game. Instead, he did step out, but it fired up the offense enough to go down and get the game-winning field goal. Then there was the heads up by play to recover an attempt onside kick by the Ravens that set up an important field goal. Felix Jones also ran back a kick 42 yards, and Antonio Brown had an 18-yard punt return. Great effort. Grade: A