Is The Steelers Fan Base Fickle? If Not, Why Are Fans Leaving Heinz Field At Halftime? 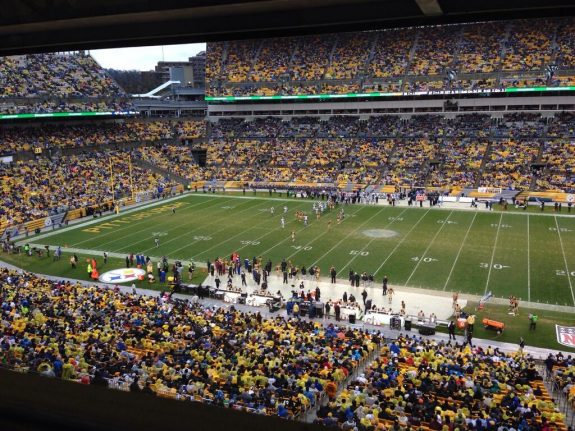 The Steelers were 10-point winners over the Lions, a team that ran up a lot of points and a lot of yards during the second quarter Sunday, taking a 14-0 and a 17-3 Steelers lead at one point to a Lions 27-20 advantage.

Before that though, something strange, actually kind of alarming, happened.

Sensing another Patriots-like debacle in which New England a few weeks back ran up a Steelers all-time allowed 55 points on defense and over 600 yards, fans started tweeting like mad about having enough and not even wanting to watch the second half of the game.

Think I am kidding? Here’s a tweet from Dejan Kovacevic from the Tribune-Review, who had VIDEO of the fans leaving:

VIDEO of fans filing out of stadium at halftime, with Steelers down one TD. No re-entry allowed. @… http://t.co/7RPwTZ6Mea

I also asked this question at the half of a 7-point game yesterday (despite the awful second quarter) – why buy a ticket in the first place?

If your going to leave the game at half down 7, why did ANYONE stay at Heinz Field in week two when the Bears jumped out to a 24-3 lead with about 8 minutes left in the first half?

Do the Steelers have flaws, and are they a LONG way from being a true contender for a 7th Lombardi Trophy?

But there’s only one champion every year, and while this team isn’t going to the Super Bowl this year (then again…) why would you pay probably at LEAST $40-$50 dollars of your hard earned money for a ticket and then leave the game at the half?

I am guilty of doing this very thing, that being leave a game well before it was over.

The 2001 AFC Title Game vs the Patriots at home. The Steelers were heavy favorites, yet when I walked to my car in disgust, they were down 21-3, and while they rallied to make it a game, they still lost 24-17.

Then again, I am not sure a true fan would.

In the world of the NFL, with a QB like Ben Roethlisberger, you can’t possibly have believed that the Steelers were out of this game.

Sure I am as surprised as anyone that they played lights out on D in the second half, holding Calvin Johnson to no catches and Matthew Stafford to just three completions.

Stay at the game, you never know what can happen.

More so, you just may create a memory that you can relive for years to come.