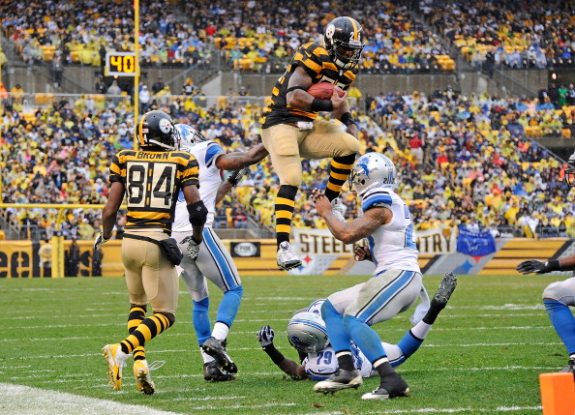 Sundays victory over the Detroit Lions may very well be one of the best wins this team has had in a while.  In a crazy season where a 4-6 record is good enough to be within reach of the second wildcard playoff spot, the Pittsburgh Steelers played like a team on a mission.  Going into this game without Brett Keisel and Lamarr Woodley, a banged up offensive line against one of the best d-lines in the entire NFL, and numerous media stories regarding Ben Roethlisberger and his future with the team, not too many people gave the Steelers any chance of winning.

As I sat in Heinz Field, I got the sense that I was watching a transition from the awful team we saw earlier this season, to a team that is ready to uphold the winning expectations of Steeler Nation.

The offense on the first drive of the game was absolutely fantastic to watch.  They moved right down the field, converting several 3rd Downs and ultimately scored a touchdown.  Yes, a touchdown on the first drive of the game!  Its about time too.  Big Ben played another incredible game throwing 4 touchdowns while throwing no interceptions.  It goes without saying, that if you force turnovers and you minimize the turnovers on offense, your chances of winning go through the roof.  Antonio Brown made both Steeler fans and fantasy owners happy with another outstanding game and nearly matched the performance of the Lions’ Calvin Johnson.  Although Ben and the passing game stole the show, the running game was a disappointment.  Le’ Veon Bell just could not get any type of momentum at all throughout the game.  The offensive unit played very well.  Not a perfect game, but a game this team and the fans can be happy about.  Overall Offensive Grade: A

Determined to finish the game strong, the defense came out in the second half and did not give up a single point.  This unit played well but they missed a lot of opportunities for interceptions.  After watching Ike Taylor throughout the years, I am now completely convinced that both my grandmothers have better hands than he does.  For 3/4 of the game, this unit was outstanding against a top offense, but for one absolutely horrendous quarter they looked like a bunch of cupcakes and it almost cost them the game.  Overall Defensive Grade: B

Going against an offense like the Lions on a rainy day, field position was key.  Mat McBriar was horrible for another week, consistently giving the Lions short field position.  Even on a windy, rainy day, there is no excuse for punts like that.  When the Lions decided to fake a field goal inside the Steelers 5 yard line, they forced a fumble and was a big momentum swing back in the Steelers favor.  Antonio Brown had one good punt return, but other than that it was another mediocre day for special teams.  Overall Special Teams Grade: C-

Although this was a great win for the Steelers, it was a bad day for Steeler Nation.  As the first half came to a close, literally thousands of people flocked to the exit gates to leave Heinz Field.  I could not believe what I was watching.  On top of the thousands that left the game, thousands of seats were empty from the very beginning.  Despite the 4-6 record Steeler Nation, we have a legitimate chance of turning this season around and we cant abandon our team.  Stay strong Seeler Nation!

Comment with your thoughts, opinions, and of course your grades for this weeks game.  You can also Tweet us @SteelersGab or @Tylersweet87 with your grades.

Is The Steelers Fan Base Fickle? If Not, Why Are Fans Leaving Heinz Field At Halftime?
Steelers 2013 Scouting Report Week Twelve: Cleveland Browns