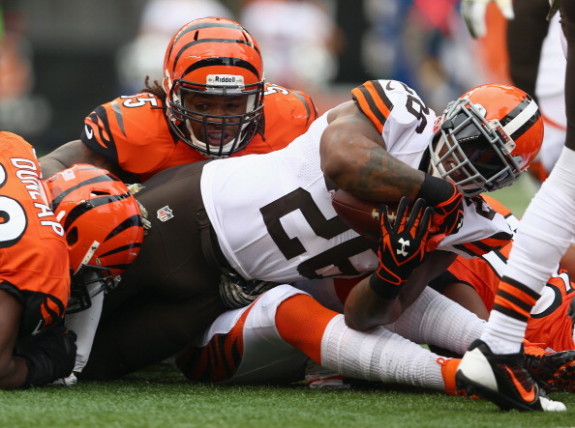 The Steelers, winners of two in a row, head to Cleveland Sunday to take on the likewise 4-6 Browns, a Cleveland team that built a 13-0 lead over the Bengals Sunday only to lose badly 40-21.

The Browns after an 0-2 start won three in a row, but did it with Brian Hoyer, who is out for the season with a leg injury. Now the team is going with journeyman Jason Campbell at QB, but he’s been average at best for the team.

So with all that said, can the Steelers get to 5-6 with a win over their arch-rival Sunday, or will it be another huge letdown? Let’s take a look at this weeks scouting report for the Browns as we get set for week 12.

1. Awful Run Game – The Browns pulled the plug on Trent Richardson early enough in the season and moved him to the Colts for a future first-round pick. He hasn’t done much in Indy, but in the meantime the team picked up Willis McGahee for one last run, and he’s been pretty much awful, putting up just 2.6 yards per carry, and 34.4 yards per game. The Browns offense is all about the pass right now, and the run game with McGahee, Chris Ogbonnaya, and some guy named Fozzy Whittaker has been as dead as dead can be.

2. Can’t Lose Sight Of Gordon – If there’s a play-maker on the Browns offense in the passing game, it’s wide out Josh Gordon, who has had off the field issues, but on the field has been very good, putting up nearly 100 yards per game, and has four touchdowns. If Campbell looks to anyone downfield, it’s likely to be Gordon, who is looking either to cash in for another deal with another team, or looking to be the long term answer for the Browns as their future number one wide out. Ike Taylor will be challenged by Gordon.

3. Front Four On D Solid – The Browns defense is built with players up front, and they will put pressure on Ben Roethlisberger, like they did in the 2009 season in a Thursday night win over the Steelers in Cleveland. Desmond Bryant, Phil Taylor, Ahtyba Rubin and Jabaal Sheard all are good players, and it will be a very solid test for the Steelers offensive line, like it was last week vs the Lions, to step up and make plays and not allow Ben to be hurried into plays and make mistakes or hurry throws. The Steelers didn’t have a turnover Sunday and won, they need to duplicate the effort against the Browns Sunday.

Steelers vs Lions Report Card
Poll: Who Is Your Most Disliked Steelers QB Of All-Time?