Poll: Who Is Your Most Disliked Steelers QB Of All-Time? 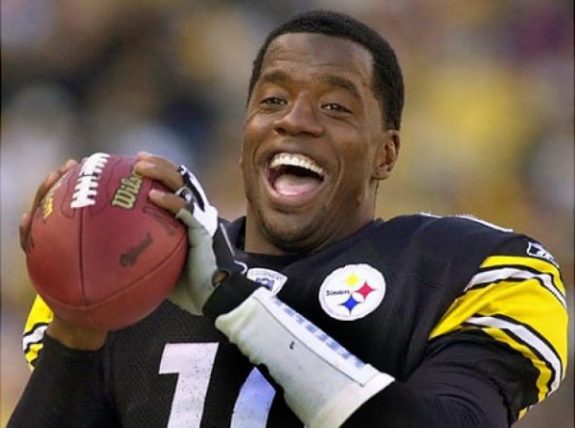 It’s a topic that as Steelers fans comes up every now and then, and while there’s no particular reason for it right now, thought it would be fun to ask our readers and fans – what QB drew your ire the most as a member of Steeler Nation when that person played QB for the Black and Gold?

So today I ask you Steelers Gab readers – which QB did you Dislike the most?

1. Kordell Stewart – Seemed to be either very good, or very bad. Started in 1997 and took the team to the AFC Title game after going 11-5 before losing to Denver at home. Played an awful game that day, and seemed to hinder him the entire next two seasons. Was replaced by guys like Jim Miller and even Kent Graham, before getting the starting job back in late 2000, and again was great in 2001, leading the team to a 13-3 mark and an AFC Title game, in which he was awful again, losing to the Pats. Was eventually replaced early in 2002 by Tommy Maddox.

2. Neil O’Donnell – Starter from 1992 to 1995, had the team to the playoffs every year, and even set AFC Title game records in the 1994 AFC Title Game loss to the Chargers. Was very good in 95, as team went to more of a 5-wide set and he thrived, and in AFC Title game brought the team back from down 16-13 to Colts to a late 20-16 win in still maybe my all-time favorite Steelers game. Problem is, threw two bad picks in Super Bowl XXX, which people still to this day blame him for. Instead of coming back and facing the music, left the team that offseason to go to the Jets, and his career floundered.

3. Bubby Brister – Big arm, and some highlight films compared this Southern boy to Terry Bradshaw. Not quite. Started from 1988 to 1990, and never really had it, though once he left was very good as a backup in Philly, and was great as John Elway’s backup in Denver, getting two rings before finally calling it quits. Just a lot of pressure on a young kid with the world on his shoulders in Pittsburgh.

4. Mark Malone – More remembered for his TV work than on the field, Malone was drafted in the first round, and played special teams and wide out before finally getting his shot. Was the QB for the Steelers 1984 playoff run which ended with an AFC Title game loss to Miami. Again showed flashes, but never was able to be consistent enough to be a good QB for a long period of time.

5. Kent Graham – Was a free agent pickup and started the 2000 season for Kordell Stewart, and was simply awful. About only thing I recall was a week two game vs the Browns in which down 3 took a sack with seconds left to not allow the Steelers to get the field goal team on the field to try and chip shot tie the game. Wasn’t around very long to say the least.

6. Ben Roethlisberger – Believe it or not some folks still to this day think that Ben’s off the field issues from a few years back are reason enough for him to find work elsewhere. I think those days are long gone, and he’s been a model person and player ever since, and will clearly go down as if not the best, than the second best QB in the history of the team.

Let’s hear it Steeler Fans – would love to hear your comments on why you chose who you chose!