Look Back: Steelers Win Early Season Battle In Cleveland In 2008 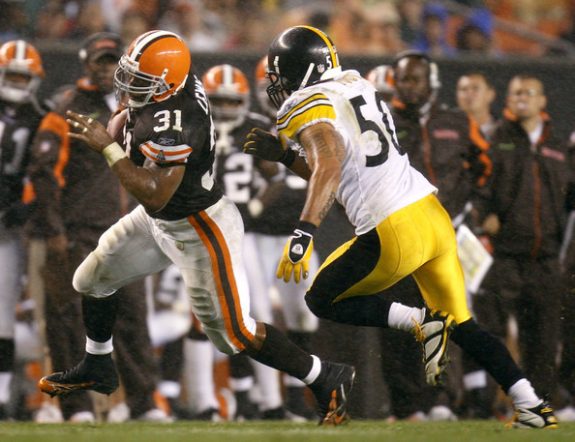 Playing it like it was old school in the AFC Central, the Pittsburgh Steelers rolled into Cleveland to take on the Browns Sunday night with wind and rain being the early victor over anything either team could do on offense. Nevertheless, the Steelers, a team that had beaten the Browns 9 straight entering the Sunday night showdown, had enough once again to top their rivals, beating them 10-6 to move to 2-0.

The night was of little offense, but had a lot of hard hitting and a few critical plays. Maybe the most critical came on the last play of the second quarter with the Steelers up 7-0. From the Steelers 11, Browns QB Derek Anderson threw an awful pass at the three that Troy Polamalu picked off, ending the biggest threat the Browns would have all night. The only scoring from the Browns were two Phil Dawson field goals.

The Steelers, going against the wind, put together their best drive of the game midway through the second quarter. Starting at their own 30, Ben Roethlisberger converted a third down to Santonio Holmes, then was sacked but earned a face mask penalty, putting them on the Browns 49. On a fourth-and-one five plays later, Willie Parker went around end for 13 yards and a first down.