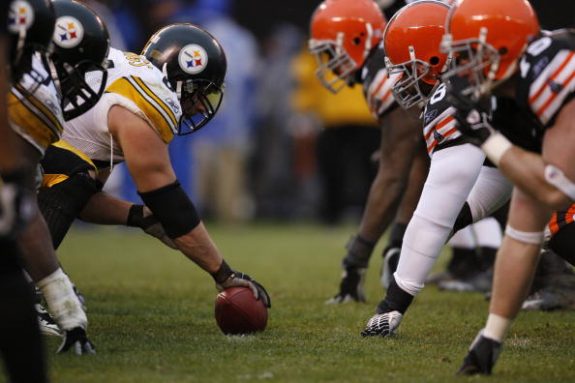 It’s week 12, and while the Steelers still have just four wins, their last two suddenly have them right in the thick of the playoff race in the AFC.

They leave the confines of Heinz Field to head to Cleveland, a place where they have usually play well, but over the last four years have gone just 2-2.

Last season with third-string QB Charlie Batch getting the start, the team played a game of giveaway, as they gave up a record EIGHT turnovers in losing by 6 at 20-14.

This time they have Ben Roethlisberger back against the Browns, and it’s time to gives some keys and our final pick for the matchup.

1. Keep Ben Clean – Last week against a front-four that got all the pub going in, the Steelers O-line played well enough against the Lions to pull out a 10-point win and the offense played well and seemed effective in the hurry up. The Browns defensive line is their strength, and they will try to pressure Ben and make him hurry throws. They can’t go backwards after a good game last week vs Detroit.

2. No Mistakes – The Browns give up points, but at the same time, they don’t seem to have the talent to dominate a game from start to finish. It’s kind of like the Raiders game, if the Steelers make bad mistakes, give up early points and play from behind, it will be tough. They have to get an early lead and force Cleveland to take chances downfield, which should turn into turnovers. Last seasons 8 turnovers was a joke that no one wants to relive Sunday.

3. Lean On Big Ben – Roethlisberger has dominated the Browns since he came into the league in 2004, going an amazing 15-1 against them. Against the Browns he’s hit on 62.5 percent of his passes, and hasn’t thrown an interception at FirstEnergy Stadium since 2006. While it would be nice to have Le’Veon Bell get the team a chunk of yards now and then, if the offense is going to play well, it’s going to be on Ben’s shoulders.

Prediction – This game scares me, and not just because of the fact the team hasn’t played great in Cleveland much in the last four years, but the weather is supposed to be a factor, with wind, snow and cold temps. The defense has to hold the Browns to about 10 points, as I don’t think the Steelers are going to play a high-powered offensive game with the weather and a solid Browns defense. With that said, I think the Steelers are a touchdown better right now, do get ready for the teams third straight win. Pittsburgh 17 Cleveland 13