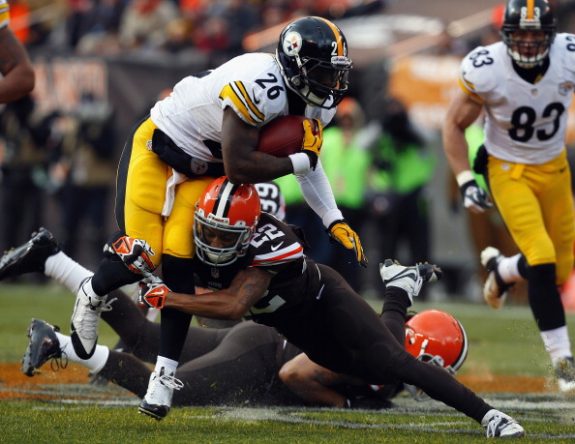 The last time the Steelers went to Cleveland to face the Browns, I sat in the middle of the ‘Dawg Pound’ and had to endure 7 Steelers turnovers and ultimately a loss.  That may have been one of the most frustrating games I have ever witnessed first hand.  Thankfully the Steelers did not turn the ball over once and the outcome of this game was much better.  We have learned in the past to not overlook the lower end teams of the league (Raiders and Titans) because at this point in the season, any more loses can mean the end of the season.  This week however, the Steelers took care of business and got the job done.

Coming off a huge game against the Detroit Lions, Big Ben and the Pittsburgh Steelers looked to keep the momentum rolling into this weeks matchup.  Several things concerned me as I watched the game yesterday.  The Steelers were fortunate they played a Browns team with one of the worst offenses in the entire NFL because the amount of dropped passes and missed throws by Ben would have hurt them against almost any other team.

On the positive side, Antonio Brown matched himself up with one of the best corners in the AFC in Joe Haden and was impressive once again.  Brown is quickly emerging as a top tier receiver in the NFL and his numbers do not lie (6 catches for 92 yards, 1 TD)  Rookie Le’Veon Bell ran hard the entire game but just could not find an opportunity to break the big run.  A good not great outing by the offense this week, but converting 4 of 14 on 3rd down just can not happen, especially when more than half of those happened to be in Browns territory.  Overall Offensive Unit Grade: B

Despite the Browns having an awful offensive unit, I still believe the Steelers defense played very well and FINALLY capitalized on an interception and took it to the house.  Many fans (including myself) have been very tough on the Steelers secondary this entire season, especially William Gay.  I will admit however that he has proven us wrong the past few weeks and really put on a performance against the Browns worthy of an AFC defensive player of the week nomination.  Gay came off the edge on a corner blitz and strip sacked Jason Campbell, then later took an interception thrown by Brandon Weeden to the endzone for a touchdown.  Congratulations Mr. Gay! You are now officially out of my dog house.

Cameron Heyward continues to play tremendous football, recording another sack and also added a fumble recovery.  Troy Polamalu played up on the line almost as a linebacker for most of the game and was in on several tackles and forced 2 huge fumbles.  Al Woods saw plenty of playing time with injuries along the defensive line and made the most out of his opportunities recording 2 sacks of his own.  On the negative side, Ike Taylor had a bad game.  Josh Gordon set a Browns franchise record for catches and yards (14 for 237) and despite many of the yards coming late in the game when the defense was in zone coverage, Ike missed a couple tackles that sprung Gordon loose for extra yards and also gave up the Browns only touchdown.  It appears the defense has found some of the swag they have been missing for most of the season and hopefully can carry it with them into the big game against the Ravens on Thursday. Overall Defensive Grade: A

Can somebody please tell me why the Steelers continue to put Mat McBriar on the field every game?  There has got to be someone else out there that can atleast punt the ball farther than 40 yards.  Heck, even Roethlisberger outperformed him on special teams.  The entire punt team was not good at all.  The Browns went right through the punt protection and came within inches of blocking a punt that would have been a huge momentum swing.  Field posession is huge this time of year and this punt team will eventually cost the Steelers at some point down the road.  Shaun Suisham did his job and made both of his field goals despite swirling winds and the below freezing temperature.  Overall Special Teams Grade: D+

Up next on the schedule is a Thanksgiving Day matchup with the rival Baltimore Ravens.  If your not pumped for this upcoming game, then something might be wrong with you.  Not only is this a rivalry game, but once again the winner of this game will put themselves in the fantastic playoff contention while the loser will almost certainly have to win out to have a chance.  Im looking forward to another hard hitting, smashmouth football game on one of the best days of the year in front of a national television audience.  LETS GO STEELERS!