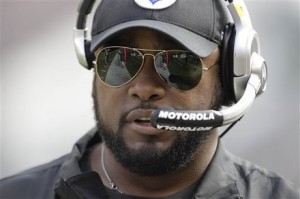 KDKA in Pittsburgh has released new footage of the now infamous kick that everyone is still talking about from Thursday night in Baltimore.

In the video, you can see Mike Tomlin stepping towards the field before having to jump out of the way at the last second before he got run over by Jacoby Jones.

Tomlin today defended the incident again, telling Jay Glazer of Fox Sports that there’s no way that he tried to interfere on purpose.

Steelers HC Mike Tomlin texted @FFD @JayGlazer and told him "if anyone thinks I did this on purpose, they are crazy." #FOXFOOTBALLDAILY

As of 6:30pm Monday night, the NFL hasn’t handed down any sort of punishment against the Steelers coach.