Banged Up Steelers Look Ahead To Miami 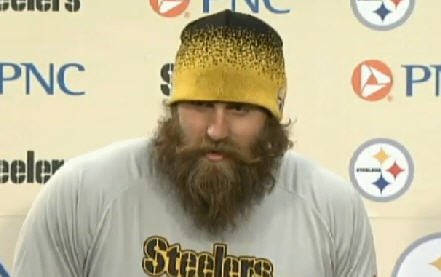 The Steelers are getting the day off today, but when they get back on the field tomorrow to start to prep for the Dolphins, they will be very much shorthanded.

Coach Mike Tomlin reported today in his media session that defensive end Brett Keisel will not play in the contest after leaving the Ravens game with plantar fasciitis in his left foot.

The offensive line will look nearly totally different Sunday due to injury across the board.

Center Fernando Velasco had surgery Saturday and is done for the season, and Cody Wallace will get the first crack at center Sunday.

The team may or may not have the services of tackle Kelvin Beachum, as Tomlin said he’ll miss the early part of practice with a right knee sprain.

The same for guard David DeCastro, who will sit early in the week with a left foot sprain, he will be questionable for the contest.

Tackle Mike Adams would likely get playing time, but he’s suffering from a left ankle sprain, and could miss practice time.

Also on the injured list will be nose tackle Steve McLendon (left ankle sprain) and linebacker LaMarr Woodley (left calf strain), though both could play according to Tomlin.

Then there’s the case of running back Le’Veon Bell, who suffered a nasty concussion in the loss to the Ravens Thursday.

He did practiced Monday in a limited capacity, and will be watched close as the week goes along, though it does sound like he could go vs the Fins.