Playoffs?! Don’t Talk About Playoffs – Steelers Odds Are Not Good 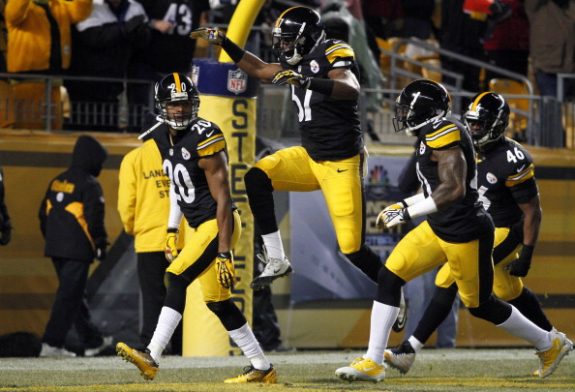 Winning the huge $586 Mega Millions lottery or the Steelers making the playoffs.

Which odds do you think are better?

Well, winning the lottery is a mere 1 in 259 million, while the Steelers making the playoffs sit at just 1.6 percent.

With that though, there is still a shot for the Steelers, but they need a lot – and I mean A LOT of things to happen in the next two weeks to make the postseason.

First, and most obvious is that the Steelers need to beat both the Packers Sunday in Green Bay and the Browns at home.

Then, this is what has to happen for the Steelers to be the #6 seed and likely be in line for a trip to Cincy for a third meeting with the Bengals.

Baltimore Ravens: Must lose both games – remaining schedule is vs. New England, and at Cincinnati.

Miami Dolphins: Must lose both games – remaining schedule at Buffalo and vs. New York Jets.

San Diego Chargers: Must lose one game – remaining schedule vs. Oakland and vs. Kansas City.

New York Jets: Must win both games – remaining schedule vs. Cleveland and at Miami.

With all that said, the Steelers probably will be able to make vacation plans for January 1st after Sunday in Green Bay.

Much like last season, when the final game of the year at home vs the Browns was for bragging rights – it almost for sure will be the same again a week from Sunday.