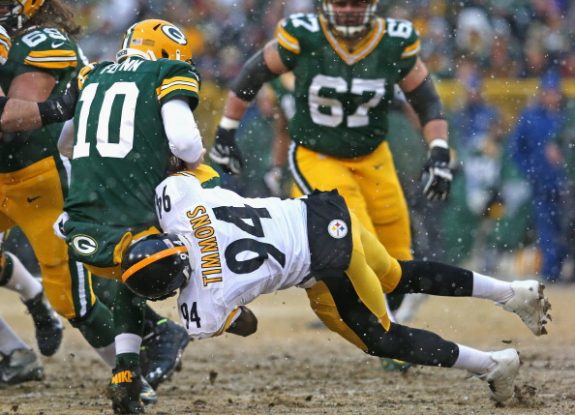 The day started with the Steelers needing help and a win to continue their dreams of playing football past week 17 of the NFL season.

For one day – it all worked out.

A big day by Le’Veon Bell and 14 points off two Green Bay turnovers was enough as the Steelers topped the Packers 38-31 in a game that was as crazy as the Steelers have played all season.

The end came when with :10 seconds left and the Packers on the Steelers 6 after a long kick return, Matt Flynn tried to hit Jarrett Boykin in the end zone, and it was too high and there was good coverage by Ike Taylor to save the win.

The win puts the Steelers at 7-8, and they have the Browns at home next week but need help from a few other teams to reach the postseason.

Bell had 124 yards on 26 carries, the first 100+ yard rusher for the Steelers since Issac Redmen last season, 22 games ago.

Ben Roethlisberger was 16-for-28 for 167 yards with two TD’s and an interception by Packers LB A.J. Hawk.

The game had it’s controversary, as the refs appeared to blow a call on a blocked Packers field goal, stating Green Bay got the ball back after Cam Heyward batted it forward.

The call was that neither team had possession after the block, but it was clear that Ryan Clark had the ball and lateraled it back, but the call could not be reviewed.

The Packers rallied from 31-21 to tie the game at 31 when former Steeler FB John Kuhn rushed for a 1-yard score with 7:12 to play.

The Steelers D made the play of the day when Troy Polamalu forced a Matt Flynn fumble inside the 20, which Brett Keisel recovered.

An offsides on a field goal gave the Steelers a first down, and Bell went in for the game-winning score.