Steelers Overcome Not Only Packers But Awful Officials 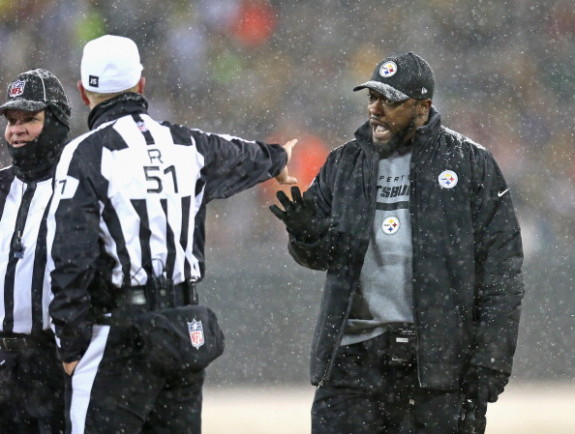 The NFL is a game of inches fought among some of the best athletes in the world. They fight tooth and nail for the right to be called the best.

So it’s tough to swallow when a group of men wearing stripped shirts nearly take all the fight and make a call that causes you to lose a game.

That’s exactly what nearly happened to the Steelers on Sunday in their crazy 38-31 win over the Green Bay Packers when a group of officials made a call so head scratching that many fans are still trying to figure out how it could have been botched.

If you watched the game, you are well aware of the call, as it came after a defensive stand by the Steelers in the third quarter leading the game 17-14.

Le’Veon Bell fumbled inside the five, but the Steelers D and Mason Crosby came on to kick what should have been a chip-shot field goal.

Instead, it was blocked, and a scramble ensued and the ball ended up near the sideline where Ziggy Hood batted it out of bounds.

As the Steelers were celebrating their stand, flags flew, as Hood was hit with a call of an illegal batting out of bounds.

Instead of it being a penalty that was half the distance to the goal, the refs signaled that it was the Packers ball inside the Steelers five, and chaos ensued.

The call was that neither team had possession, which is why the ball went back to the Packers, but watching the replay that was not the case at all.

Safety Ryan Clark picked up the ball, and flipped it back to Willie Gay, who dropped the ball which is when Hood knocked it out of bounds.

The official ruling is that the Steelers never controlled the ball after the block and that it never crossed the line of scrimmage of the Steelers 5.

Again though, that was not the case. Clark actually had his knee hit the ground with the ball in his hands, so it should have been the Steelers ball at about the 10-12 yards line.

It was such an insane call, that Twitter exploded afterwards and of course once the Packers scored on the next play to take a 21-17 lead.

Ryan Clark had the ball and lateralled it to Gay. Officials ruled #Steelers never had the ball #NFL should be embarrassed

So the officials missed 2 calls (recovery, knee down) & the rules don't allow review. That's the state of NFL officiating.

Since when is possession not allowed to be challenged? I'm confused. The worst season for NFL officials ever continues

”It’s human error in this game,” Clark said. ”The guy didn’t see it, he didn’t have the opportunity to know if I had possession, so he made the call that he saw and that’s part of football. It’s no big deal, we won.”

In a game and league that is worth billions of dollars, it’s a 1000 percent disgrace to have officials who are part-time deciding games.

They are lucky this one went the right way. If it would not have, Steelers fans would have had something to gripe about for a long time to come.

Videos: Tomlin, Roethlisberger And Sanders On The Win In Green Bay
How The Steelers Can Still Wind Up As The 6th Seed In The AFC