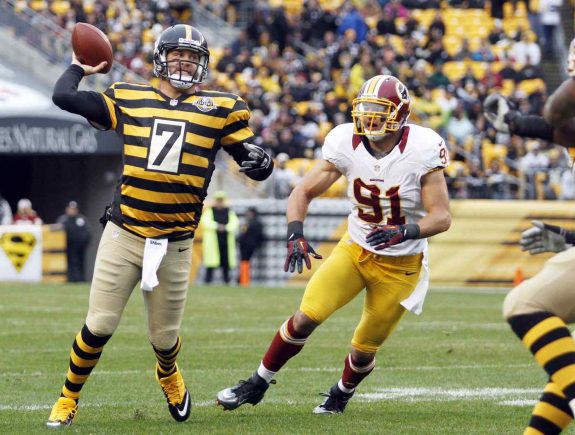 The last two seasons have seen the results for the Steelers be less than expected, missing the playoffs in the last two years with 8-8 records.

If there’s one thing that can’t be denied, it’s that this football team is a LOT better when their franchise QB, Ben Roethlisberger, is playing at a high level – which he did after a slow start in 2013.

Big Ben’s name was in the news more than normal midway through the season when Ian Rapoport of NFL Network reported that the QB was upset with the team and may look to get out if the team was willing to move him.

The QB fought that reported more so than just about any other player in the league ever has, and said he wants to stay with and retire with the black and gold.

His GM feels the same way.

Kevin Colbert spoke at the combine on Thursday, and on 93.7 The Fan in Pittsburgh made sure to say all the right things about wanting the QB to be with the city and retire as a Steeler when that time comes.

“It’s unanimous that we want Ben to be a Steeler for the rest of his career,” Colbert said on 93.7 The Fan. “There’s nobody that I’d rather have or the franchise would rather have than Ben. He’s won for us, there’s still a lot of tread of the tires.

“We feel good about where he is, we feel great about how he finished last year and we’re looking to build off of that.”

The cap number on Big Ben is just under $18.9 million in 2014, and it’s important for the team to get a deal done so that number doesn’t kill them moving forward this offseason.

He set a franchise record for completions in a season with 375, and threw for 4,261 yards and becoming the Steelers’ all-time leader in touchdown passes.

The question now for Big Ben – can a deal get done, and how long will it take to happen?

Report: Woodley Unlikely To Be With Steelers in 2014
Dwyer Says He Will Be Slimmer Than Last Year