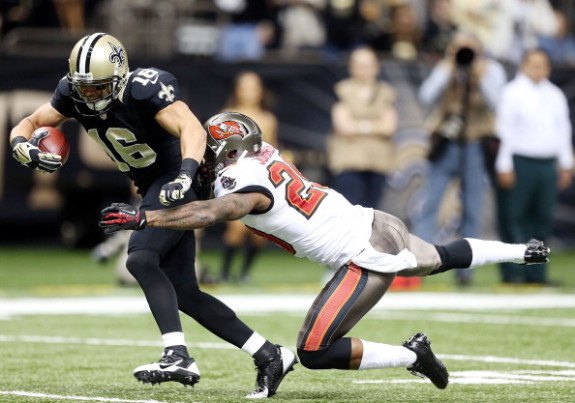 The Steelers still very well may take a wide out early in Thursday’s NFL Draft. In the meantime, they have a new player on their roster that is very capable of making things very interesting this fall for the club.

That player is Lance Moore, who left the cozy comfort of catching balls from Drew Brees in New Orleans to join a Steelers team that has missed the postseason the last two seasons.

Moore, who is just 5-9 and 190 pounds, will start camp as the number two wide out, but don’t think for a minute he can’t get the job done. Last season he caught 37 passes for 457 yards and two touchdowns, but in his career has shown a knack for getting into the end zone.

Of his 346 career receptions 38 of them have gone for touchdowns, and he says that coming to the Steelers he feels he’s going to make a great impact with the club.

“I came up here and had a great time. I met all the coaches. It felt like it was right. Coming from a place where things are run the right way, ownership is great and you win a lot of games, obviously won a world championship, you want that feeling again,” Moore said.

“You want to be able to get somewhere where you have an opportunity to win. I’ve been in the game 10 years now. I am not here just to try to collect a check. I want to win another championship.”

Make no mistake, the team needs Moore to step in and make big plays. They are confident that it will be a match made in NFL heaven come September.