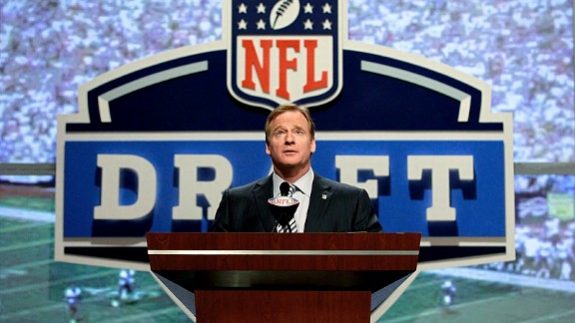 Since the NFL switched to a three-day draft in 2010, the typical Easter-time NFL Draft event has been pushed back, to the frustration of Pittsburgh Steelers fans, teams, scouts, organizations and even draft prospects.  In previous years, the draft would have already been underway, allowing fans to elude the mass of mock drafts and speculative debates that have predominated social media and news sites alike this year.  According to NFL Commissioner Roger Goodell, it was a scheduling conflict that prevented the draft from being held prior to May 8-10.  Radio City Music Hall, the location of the NFL Draft event, was already booked.  Everyone is eager to move on to the meat and potatoes, so to speak.

Gil Brandt, a former Cowboys executive who currently helps organize the NFL Combine and NFL Draft said, “I think if you asked 32 teams, about 30 of them would say, ‘Let’s go back to the old way’.”

“From our standpoint, it’s another two weeks that people are talking about the draft,” Goodell said. “When we are thinking about these things, we don’t like to put a lot of restrictions on them . . . We don’t take too many things off the table until we see it’s something we don’t want to do.”

Many NFL fans are concerned that the move to hold the draft in early May will be a permanent situation, although the NFL has yet to confirm that it will be the case.  Due to this year’s conflict in New York City, a spokesman for the NFL said that the league is considering moving the event to other cities in the future and spreading the event over four days instead of three, the current length.

“I love seeing who the team has visited with, brought in for workouts,” said Steelers fan Tom Banks on Facebook, “but this offseason has seemed to drag on and on.  I am ready to see who the Steelers are putting on their roster, already.”

In a flurry of conversation on social media sites, many Steelers fans have shared similar sentiment.  Pre-draft visits have been intriguing and generated a lot of discussion – too much speculative discussion for some.  “I am not a college football fan, per se,” said Mary Bethany who has been a Steelers fan since the 1970s.  “I may take a look at who has visited, but I don’t get real excited until the draft is televised and I can see who will be added to the team.  I am about the Steelers and who is gonna be in those jerseys come training camp.”

The delay in the draft hasn’t been the worst thing that has happened in the National Football League.  According to a report by The Boston Globe, a front office executive and a special teams coach separately reported that the extra time allowed teams to look at players that may be signed as undrafted rookie free agents as well as players that will slide to later rounds.  The teams that appear to benefit most from the extra time are those who have seven new head coaches in 2014.

Brandt also told The Globe that the time has allowed teams to have an extra two weeks to make allowances in their budgets ahead of the draft.

“I love doing mock drafts every season,” Mike Grant admitted.  “This year, I have had more time to take a look at all 32 teams and narrow down who I think each will select each round based on visits and NFL Combine meetings.  Unfortunately, it has simply made me more anxious when I see (college) players making over 20 visits with different teams.  If they are selected, are they going to be too worn down from those workouts to be effective in training camp?  Are any of them going to get injured as a result and end up being a draft bust?  I’m just not convinced that moving the draft back to May is ideal.”

Steelers Get Visit From Nebraska WR Quincy Enunwa
Seventh round in NFL Draft of value to NFL teams, including Steelers