Between The Hashmarks: Why Steelers pick of Shazier makes perfect sense 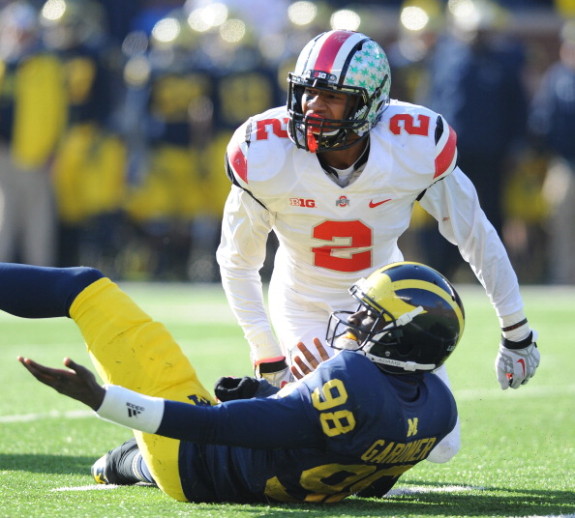 Whether he was wearing number ten or number two on the field for Ohio State, Ryan Shazier was busily keeping Big Ten opponents off of their game.  Drafted in the first round by the Pittsburgh Steelers on Thursday night (15th overall), Shazier busted many a pre-draft mock – sending fans scuttling on social media to figure out why the Steelers hadn’t gone after a ‘hot’ cornerback or lanky wide receiver to compliment Ben Roethlisberger’s arm on offense.  The answer is clear – the Steelers want their once-dominant defense to rule the AFC North and even give the rest of the NFL a run for their money and get back to playoff form.  In this, our inaugural feature of “Between the Hashmarks”, we’ll show why Shazier’s selection makes perfect sense.

While most of us have heard Warren Sapp complain enough times about the Steelers defense being “old and slow” to want to reach through a computer or television screen and throttle him with our bare hands, it’s likely even Sapp can’t argue that Ryan Shazier isn’t a good fit in Pittsburgh.  Shazier is, on film, the fastest linebacker in the 2014 NFL Draft.  Disruptive, instinctive and fiercely determined.  Freakishly so, in fact.  A born leader through action, not words.

Chris Wesseling an “Around the League” writer for NFL.com said of Shazier, “(The Steelers) are now reversing Father Time by adding the fastest linebacker we have seen on film since Brian Urlacher entered the NFL as a freakishly talented former New Mexico safety, wide receiver and kick returner.  Shazier and Lawrence Timmons could rival the 49ers’ inside linebacker duo as the NFL’s most dynamic.”  Wesseling went on to say that if the Steelers can hit a home run in the second round, which will be held on Friday, the Steelers “might just be the favorite to take the AFC North in 2014.”

The 49ers’ linebacking duo Wesseling was referring to: Patrick Willis and NaVorro Bowman.

While NFL fans may not have heard much about Shazier ahead of the draft, it could be mainly due to the vast number of “mock” drafts that are analyzed, over-analyzed, re-scripted, rewritten and then put out as NFL gospel.  Kevin Colbert isn’t the type of general manager that buys subscriptions to mock drafts.  In fact, before the Steelers group even entered their war room on Thursday night, they had their draft board set.  Shazier wasn’t projected by “insiders” to go as high as the first round.  In fact, his CBS Sports draft score was only in the “6” range.  That means Colbert and Tomlin, who visited Ohio State, saw something that absolutely made up their minds about how Shazier would fit into the Steelers’ defense.  Right now, somewhere, Dick LeBeau is licking his chops with a smile.

Gregg Rosenthal of NFL.com said, “This was a great night [Thursday] for people who root against mock drafts. It was a reminder that we usually know nothing heading into the first round. It is the kind of night that keeps us coming back, powerless to understand why we are so transfixed by a man reading names off notecards.”

Shazier’s reaction to being drafted by the Steelers was this:  “I was just shocked.  I saw the area code [on the phone] and I immediately knew what team it was.  Playing at Ohio State, I know the Pittsburgh area code pretty well.  Just being over there, and hearing my name called and talking to Coach Tomlin was just an amazing feeling.”  He went on to say, “I know defense is what Pittsburgh’s known for and Coach (Dick) LeBeau is a great coach and has been there for a while.  We have to get rolling and get back to the old ways.”

Colbert and Tomlin couldn’t hide their excitement after they made their announcement.  “You don’t make 150 tackles without running to the ball,” said Tomlin of Shazier.  “(Ryan’s) tape says that, he doesn’t need my endorsement.  He plays with a great deal of urgency.  We’ve looked at a lot of Ohio State tape over the course of his career.  He was a significant contributor from the day he stepped on campus, and he really improved over the course of his stay there.”

“This kid is talented,” Colbert echoed, “and unique.  He’s going to continue to grow and his ability to make plays laterally in the backfield as tackles for losses…I mean you think about the inside rush possibilities with him, Lawrence (Timmons) and Troy (Polamalu) and whoever else we add to the mix it will be exciting.”

Steelers Nation is one that typically is very, very involved and invested in what the team does – including the NFL Draft.  After an initial flurry of confusion, rants that the team had busted the draft in the first round and an overall wave of confusion, people started looking into Shazier.  And then, they sat up a little taller with eyes a little wider.

Imagine Polamalu no longer being the lone man on the defensive roster roaming along the line looking for an edge on the snap count and bursting through to make a huge play.  Imagine Timmons opening a hole by taking on two offensive linemen at a time.  Then imagine Jarvis Jones or Jason Worilds coming off the edges.  Then smile when you see Shazier come unblocked right into Johnny Manziel’s face in Week One at Heinz Field.  Did you get those warm fuzzy feelings yet?  If not, here is some video you should watch.  When you’re done, give your take (in the comments field).  It’s likely the first round pick of Shazier will make perfect sense once you do.

Shazier: “Pittsburgh is the greatest franchise”(video on Steelers.com)

Shazier: ‘The plan is to get the seventh trophy’ (article on Steelers.com)