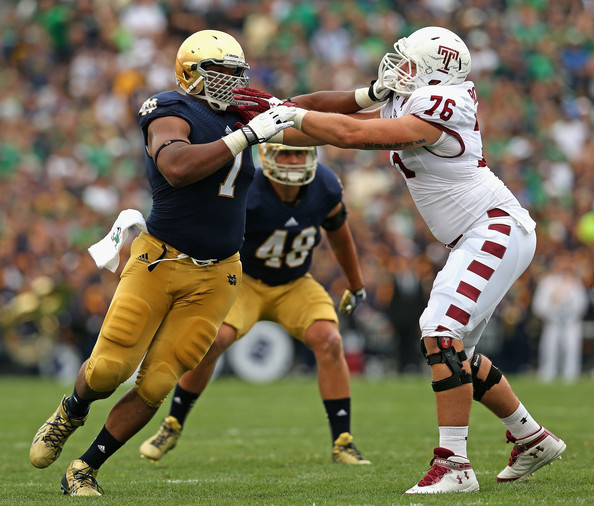 STRENGTHS: Tantalizing upside. Highly athletic frame despite massive size. Impressive combination of length, power and surprising quickness. Scheme versatility for the 3-4 and 4-3, possessing the size of most interior linemen while maintaining the quickness to provide a rush off the edge.

WEAKNESSES: Arrived to 2013 fall came out of shape following hernia surgery and struggled to dominate as he had as a sophomore. Lack of consistency was a concern as a junior. Durability concerns; also forced to sit out scouting combine due to a hairline fracture in his foot.

After Monroe Area High School had posted a combined 0-20 record over the previous two seasons, Tuitt helped lead his team to an 11-2 record and a third-round appearance in the Georgia Class AAA state playoffs as a senior.

Tuitt also saw time at tight end, but made his biggest impact on the defensive line, going on to play in the U.S. Army All-American Bowl in San Antonio before arriving in South Bend.

He saw action in nine games as a freshman, including three starts, and recorded 26 of his 30 tackles over the final season games of the season. That development would continue into the spring, setting the stage for a breakout 2012.

Tuitt started all 13 games as a sophomore, posting 47 tackles, including 13 for loss, a team-high 12 sacks, three forced fumbles, one fumble recovery, one pass breakup and a blocked kick.

Most expected Tuitt to dominate again in 2013, but he showed up to fall practice with additional weight and struggled to make the same impact early in the season. His play improved throughout the course of the year, however, and Tuitt decided to make the jump to the NFL, foregoing his senior season.

Tuitt was long expected to leave Notre Dame following his junior season, and returned to Georgia to discuss the decision with his mother before making it public.

He is an intriguing bull of a prospect with plenty of natural ability that is enhanced by the attitude of an under-equipped overachiever. That may be the result of strict upbringing by mother, Tamar Bartlett, a deputy sheriff who demanded discipline.

A hairline fracture in his foot prevented him from working out at the combine, although he did show his ample strength by hoisting 225 pounds 31 times on the bench. He is a quick, tough, massive man who will give his best, which should be worth at least a high second round pick and a shot at being one of the most reliable interior defensive linemen in the NFL.