Dri Archer surprises many as Steelers’ third round pick in 2014 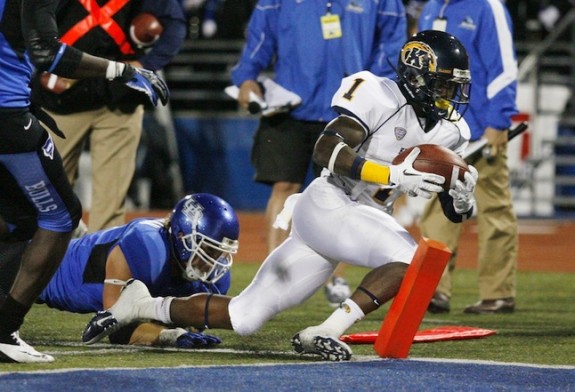 Steelers fans took to social media to wait anxiously to see their team pick a much-anticipated cornerback or wide receiver and the audible gasp nearly trended on Twitter when Dri Archer, a running back from Kent State, was selected.  The fact that Archer is one of the fastest running backs in the 2014 NFL Draft should relieve some of them.

As for whether the Steelers will use Archer as a running back or a return specialist remains to be seen.

Here is what CBS Sports projected about Archer ahead of the draft:

STRENGTHS: Great quickness and an explosive burst to leave defenders in his dust. Tough player who doesn’t shirk from physicality and ran in the box effectively throughout his record-breaking career. Versatile player who saw action at tailback, slotback, slot receiver and as both a kick and punt returner, potentially giving his NFL team a roster spot to use on another position due to his ability to play multiple roles. Operated frequently out of the slot, demonstrating burst off the line of scrimmage and out of his breaks to create separation. Catches the ball with his hands and secures it quickly, showing good toughness to hang on while absorbing a big hit.

WEAKNESSES: May even be smaller than listed. Possesses narrow hips and thin thighs that suggest his best chance at success in the NFL is on the perimeter rather than at running back, where most of his success came at Kent State. Plays hard but it doesn’t take much to knock him off of his feet. COMPARES TO: Dexter McCluster, Kansas City Chiefs – The 5-08, 170-pound McCluster has served as a moveable chess piece for the Chiefs since entering the NFL in 2010, providing big play ability at running back, receiver and returner. The team that gives Archer his chance will be hoping for similar versatility and durability.

Oregon’s DeAnthony Thomas may have garnered most of the attention over the past three years as the nation’s most mesmerizing combination of speed and agility, but Archer – the first KSU player to earn a spot on the Walter Camp All-American team — wasn’t far behind. Like Thomas, Archer spent most of his career at running back with the Golden Arches but scouts are split as to where he’ll wind up in the NFL. He was invited to the Combine as a running back but given his slight frame and soft hands, it isn’t difficult to imagine him ultimately making the conversion to slot receiver, a position he played with increasing frequency as his record-breaking career at Kent State came to a close. Regardless of what position he winds up in the NFL, Archer is undoubtedly one of the nation’s elite playmakers. If not for an ankle injury suffered on the team’s first offensive series of the 2013 season, he may have shattered Kent State’s records for all-purpose yardage and scoring. Even with the injury, Archer was recognized with All-MAC honors as a receiver and kick returner, a year after a dominant 2012 campaign at running back. Archer leaves Kent State with 4,980 all-purpose yards and 40 career touchdowns.