Between The Hashmarks: Speedster Dri Archer joins Steelers in third round 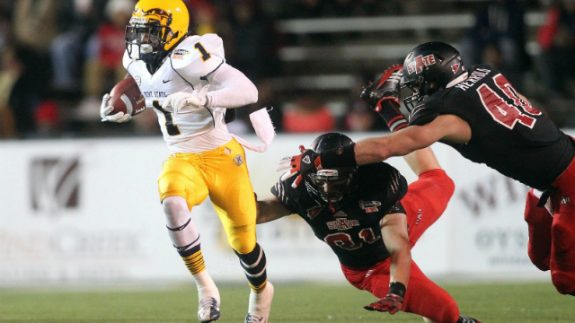 If the fact that the Pittsburgh Steelers selected RB/WR hybrid speedster Dri Archer out of Kent State in the third round of the 2014 NFL Draft on Friday night caught you off guard, you aren’t alone.  The fact that Colbert, Tomlin and company saw something more than speed in Archer is apparent.  Archer is considered to be a dangerous playmaker who holds the title as the fastest man clocked in the 40-yard dash at the NFL Scouting Combine in Indianapolis.  Archer isn’t just a running back, or fleet-footed.  He joins the Steelers as a multi-edged weapon that can be wielded at will.

Let’s just say that the fact that I added a running back was not exactly a popular opinion as I chatted with many Steelers fans.  The feeling was that the Steelers drafted Le’Veon Bell in 2013 and then went out and picked up LeGarrett Blount to be their primary rushers in 2014.  I agree.  The addition of Archer is appealing not only because he is a running back (and the Steelers still need a third on the roster) but also because he can play receiver (yes, even at 5 foot 8, 173) and is a breakout option for special teams.

Admit it, the Steelers’ special teams could use a little more sparkle.  Archer scored four touchdowns on kickoffs while at Kent State and very well may have scored more if teams hadn’t keyed in on his skill and made sure the ball went in the opposite direction.  Archer is small-framed, but he’s bigger than Trindon Holliday (5 foot 5, 170) who was selected in 2013 by the Denver Broncos.  With blocking up front, it’s hard to say what Archer could and could not do in the open field in the NFL.

If you need more convincing of the type of player Archer is, here is another fact:  The only running back to run faster than Archer’s official 40-yard dash time at the combine (4.26  was the “official” recording) was Chris Johnson (4.24) in 2008.   As for Kent State, Jack Lambert and James Harrison were both alum, and Ben Roethlisberger played at Miami (Ohio) in the MAC.  Archer seems a bit more like family already, now, doesn’t he?

My last word:  Anyone think Giovanni Bernard was gonna be too short, too small-framed for the NFL?  Think about that, and then make your decision about Archer’s worth to the Steelers.