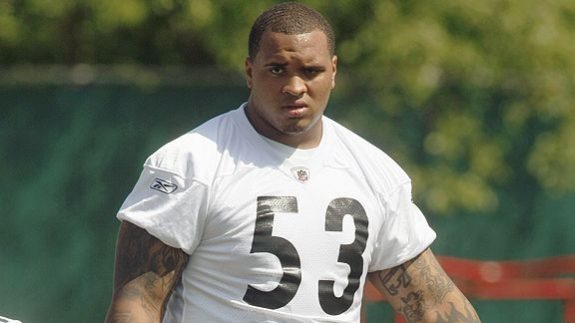 Tuesday saw the return of Pittsburgh Steelers center Maurkice Pouncey for the first time since tearing his ACL in the 2013 NFL season opener on the first day of ten organized team activities (OTAs).  He was all smiles after the workout.  After watching Pouncey languish on the sidelines during the 2013 season was heart-wrenching, but his return is something the Pro Bowl center is excited about.

“I am out here, full go,” said Pouncey.  “It was a big step for my coaches to see (me play), my teammates to see it, and for me, it was pretty cool.  I was able to block guys and finish on some plays.  It was pretty awesome.”

Taking snaps with the first team had the team looking ahead to how the 2014 season may play out.  Quarterback Ben Roethlisberger looked visibly relieved.  “(Pouncey’s) a comfort blanket, and he’s a leader of this team,” said Roethlisberger, “and a leader of the offensive line…it’s just good to see him out there because he’s a football player and he loves the game.  It was great to see a friend.  He’s a guy that worked so hard to get back out here, and it’s fun to see him back in the pads.”

After spending so much time in Pittsburgh working hard to get back into playing shape, Pouncey admits that he began feeling good enough to play nearly two months ago, but understands there is still plenty of work that needs to be done before the season begins.  “It’s getting your confidence back and feeling that you can go out there and do it,” said Pouncey.  “I think the physical part is all done by the doctors.  They did a great job.”

Wide receiver Antonio Brown called Pouncey’s return during OTAs an “honor”.  “He was out there with us going hard, sweating,” said Brown.  “I am just thankful he is back and on the field healthy.”

After Pouncey was rolled up on in a freakish accident by David DeCastro, DeCastro was emotional.  The Steelers went out and signed veteran Fernando Velasco.  Unfortunately Velasco was forced onto the injured reserve list on November 30, with an Achilles injury.  Cody Wallace replaced Velasco and kept the Steelers offense moving forward.  While Velasco is not with the Steelers, Wallace is.  With Pouncey’s return, the Steelers have at least a player behind him that has taken snaps in a real-time environment and game experience.