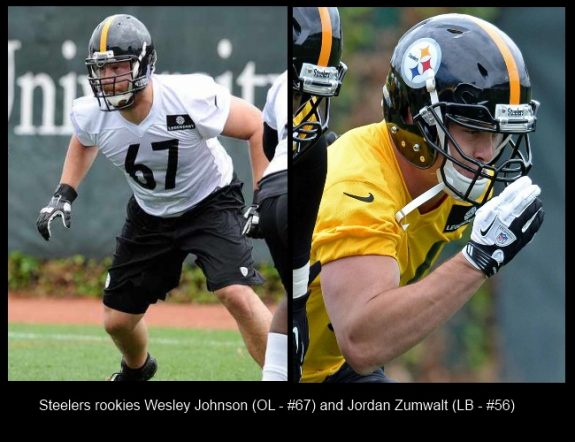 On Tuesday, the Pittsburgh Steelers signed two of their 2014 NFL Draft selections, Wesley Johnson and Jordan Zumwalt.  The additions makes the total number of draft picks signed by the Steelers at four out of nine rookies.  While financial terms of the four-year deals were not disclosed by the team for Johnson and Zumwalt, the signings do not impact the Steelers’ salary cap due to the Rule of 51.  The Steelers remain under the cap, around $350,ooo short of the limit.

Johnson was the 173rd overall pick in the 2014 NFL Draft.  At 6-5, 297, the offensive lineman played his collegiate career at Vanderbuilt University, where he started all 51 games for the Commodores.  Johnson has proven to be a versatile offensive lineman, playing at right tackle, left guard and center in college.  Johnson was an All-SEC first-team selection (from conference coaches and The NFL Draft Reports) and a second-team All-SEC selection by the Associated Press.

Zumwalt was selected 192nd overall in the 2014 NFL Draft.  At 6-4, 235, the linebacker played at UCLA where he recorded 256 tackles, two sacks, 22 tackles for loss, five forced fumbles, one fumble recovery, two interceptions and two blocked kicks in 50 games played.  Zumwalts earned All-Pac 12 Conference second-team honors by The NFL Draft Report and was an honorable mention from conference coaches.