Will Simmons: The Steelers guard and the man 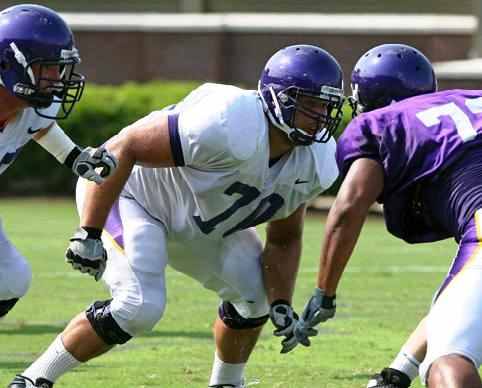 Will Simmons has a long road ahead of him to make the Steelers team. Simmons has the size and pedigree to turn heads in training camp this year. Simmons must combine his physical and mental toughness to be able to call himself a Steeler come September.

From his days at Hertford County High School in Ahoskie, North Carolina, where he started all four years and served as the captain of the team his junior and senior year,  to his college career,  Simmons has shown his football talent. His play in high school drew the attention of East Carolina University. There are many ways Simmons showed excellence and improvement at ECU. As a freshman, Simmons weighed 322 pounds. In his four years,  Simmons showed vast improvement in developing his body and physical strength. Simmons was able to gain 20 pounds of muscle and it showed on the field with his improved ability to hold blocks longer against bigger defenders. Before the 2012 season began, Simmons was voted pre-season All Conference team.  It was clear by this time that Simmons’ play was beginning to be noticed by his peers.

Simmons went on to start every game in the 2012 season. To add to his great season, Simmons was voted All- Conference second team (USA) by the coaches in the conference for the regular season. At the beginning of the 2013 season, Simmons was placed on the Outland Trophy watch list. Linemen on this list are considered the best linemen in the nation. By this time it was clear all of the NCAA knew about Simmons’ play on the field. Once again he was voted to the All Conference team, but this time it was first team.

Simmons has displayed qualities that has made him a leader by example in many ways. Simmons has also shown durability. Simmons started 38 games in college. Simmons is not known for causing trouble among teammates, proving to be a great team player. Simmons has shown that with talent and hard work you can achieve consistent success.

His coaches and fellow players on the East Carolina team felt that Simmons was the “toughest hombre” along their offensive line.  His off-field personality is typically one of reserve, but when he puts on his helmet and pads, Simmons is ready for action.  A long-armed guard, Simmons showed a nasty streak on the Pirates’ offense.  In the zone, Simmons isn’t just going to block an opponent – he’s going to finish the play and destroy the defense.

Simmons credited Coach Jeff Connors’ conditioning and strength program as giving him the extra edge he needed in college and is looking to make an even bigger impression at Pittsburgh’s training camp in July.

In an interview in 2011 with Ron Cherubini of Bonesville.net, Simmons said that his mentors were Corey Dowless and D.J. Scott.  As for his nasty reputation of taking on defensive linemen, Simmons admitted, “I guess the way I play is a little nasty in there…I just play as hard as I can each play.  I really respect those guys on defense and we battle it out there every day…You have to be physical and smart in the run game…”

During the Steelers minicamp, Simmons and linebacker Vic So’oto got into a tussle during practice and the two had to be separated.  Cornerback Ike Taylor said, “When you step on that field, you just feel the testosterone coming off the grass.  We’re territorial people and you have to be that way on the field.”  What stands out isn’t that Simmons was willing to get into it with So’oto, but that his tenacity is to fight for his position and provide 100% each and every time he lines up at guard.

Whether Simmons makes the final roster or not will depend on the competition between fellow offensive guards and linemen Kelvin Beachum, Bryant Browning, David DeCastro, Ramon Foster, Chris Hubbard, Wesley Johnson, Emmanuel McCray, David Snow and Cody Wallace.
College Highlights
Simmons played in 42 games, starting his final 38 games at East Carolina at right guard.  In 2013, Simmons was part of the Pirates’ offensive line that allowed the offense to gain 400 or more yards in ten games and helped running back Tay Cooper gain 198 rushing yards against Ohio in the Beef ‘O’ Brady Bowl; also helped Cooper rush for 1,193 yards to become only the second ECU player to have back-to-back 1,000-yard rushing seasons.  Simmons and the ECU line were awarded the Beyond Sports Network Offensive Line-of-the-Week honors for their 101-play, 603 yards of total offense against North Carolina.  Simmons was awarded a mid-season first-team All-Conference USA selection by Phil Steele Magazine in two consecutive seasons and pre-season all-league (first team) by the same magazine.  In 2011, Simmons helped ECU finish second in Conference USA in passing offense and fifth in total offense (395.2 yards per game)…protecting quarterback Dominique Davis who set NCAA records for consecutive completions (26 vs. Navy) and in a season (36 vs. Navy and Memphis).  Simmons was named ECU’s offensive lineman of the year.
Related Topics2014 NFL Free Agency2014 NFL Undrafted RookiesPittsburgh Steelers OffenseWill Simmons

Antonio Brown: The climb up the ladder of elites
Between the Hashmarks: Burning questions heading into training camp