Antonio Brown: The climb up the ladder of elites 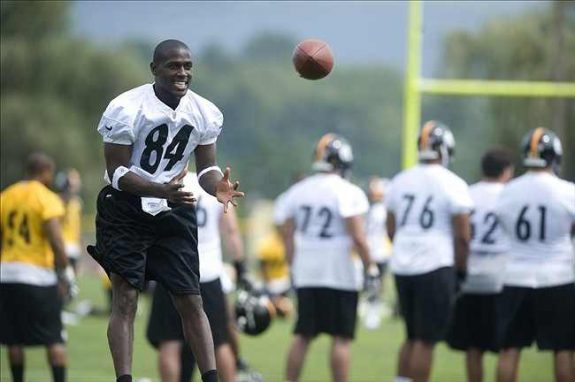 Antonio Brown has been ranked the no.23 ranked player in the top 100 according NFL.com. It has been a major climb up the ladder for Brown. A sixth-round pick from The University of Central Michigan, Brown has earned being a Top-25 player. Brown has shown size and ability –  and being a highly touted prospect doesn’t always matter.

Brown spent most of his rookie season on the sideline learning the ropes from Steelers great, receiver Hines Ward, which proved to be very helpful for him.  Brown showed early on that he had special teams ability as a punt and kick returner. In the AFC Championship against the Baltimore Ravens, Brown caught a crucial 58-yard pass on 3rd-and-19 that sealed the game and advanced the Steelers to the Super Bowl.  It showed that Brown had big-play ability in any point of a game.

In his second season,  Brown blossomed in a way many did not see coming.

In the 2011 season, Brown became the first player in NFL history to achieve 1,000 yards in receiving and in kick returns. Brown went on to earn his first Pro Bowl appearance as a receiver and returner, which is very rare. The Steelers rewarded Brown with a 5-year, $42 million deal, making him one of the top-paid receivers in the game just two years after being drafted.

Brown, over the past two seasons, has faced multiple double-teams from opposing defenses. Brown’s ability to be the go-to guy, as well as a elite returner, makes him worthy of being ranked 23rd in the NFL.  At 5’10”, 186 pounds, Brown has proven that elite size is not needed to be elite. When you consider bigger receivers like Larry Fitzgerald, Calvin Johnson, Andre Johnson, etc., it puts Brown in a elite group by himself.  The quickness and agility of Brown has been noticed by his peers – evidence of his no. 23 ranking.  In multiple seasons as a starter, Brown has only missed three games, proving himself to be durable. With his 15 receiving touchdowns, Brown has a knack for scoring touchdowns. At just the age of 25, Brown could very well be ranked a top-ten player very soon.

Steelers need to use training camp to get offense off to faster start in 2014
Will Simmons: The Steelers guard and the man