The Chase To Protect The Blind Side 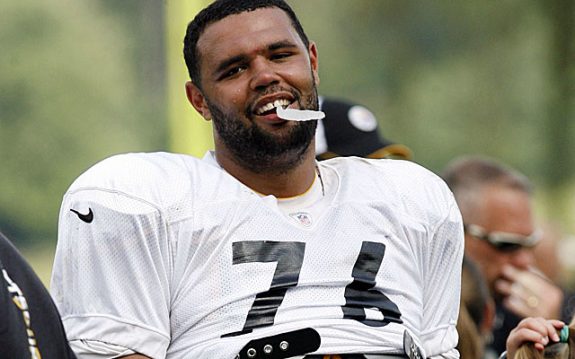 This training camp there is a competition at left tackle between the Pittsburgh Steelers’ Kelvin Beachum and Mike Adams. Both have experience at left tackle, but one improved last year and one didn’t. Both have plenty to prove, much to gain and much to lose as well.

Kelvin Beachum developed very quickly. From being drafted in the seventh round from Southern Methodist University to starting some games his rookie season, Beachum has produced more for the Pittsburgh Steelers than expected from a player who was not a clear cut favorite to make the roster. Beachum burst onto the scence in his first start against the Baltimore Ravens starting at right tackle. Going up against Pro Bowl players, Terrell Suggs and Haloti Ngata, Beachum more than held his own. With the many injuries suffered on the Pittsburgh Steelers offensive line the past two seasons, Beachum has started games at both tackle positions as well as showing the ability to play guard and center. With 17 career starts in different positions, Beachum is now considered an experienced player in the NFL. Even though Beachum ended the year strong he can not get comfortable. New offensive line coach Mike Munchak demands perfection.

Adams clearly has the physical skills to be an above average left tackle. At 6’7″, 323 pounds, very few can match the size of Adams. In his rookie season, Adams started six games at right tackle. Going into his second season, Adams was switched to left tackle. But after four games he was benched for poor play. In week four of the 2013 season Adams struggled blocking all-pro defensive lineman Jared Allen who recorded multiple sacks and consistently beat Adams off the edge. Going into training camp this year Adams is projected to backup Beachum. Adams’ size and past glory will not be enough to get him back into the first team offense. He must improve his strength and technique to work his way up. But with a fresh start and new offensive line coach, Adams has a chance to correct his past wrongs