LeGarrette Blount Helping The Steelers With Power And Skill 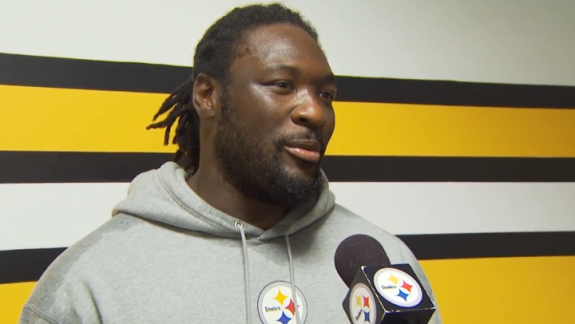 Blount will add the most value to his teammates Le’Veon Bell and Ben Roethlisberger.   Blount had been very consistent in the NFL  his rookie season rushing for over 1,000 yards with the Tampa Bay Buccaneers.   Blount has always shown the ability to break tackles as well showing the agility to make people miss. With 23 career receptions in his NFL career, Blount is someone  linebackers must cover as well. Considering the fact that Roethlisberger holds on to the ball for long periods of time, Blount will be a great option out of the backfield. As a bonus to Roethlisberger and the offensive line, Blount will help out in pass protection. At 260, it’s like having a extra tight end blocking with athleticism.

Blount feels that the Steelers’ offense will be explosive in 2014.  “(In Pittsburgh) you’ve got a quarterback that has won a couple of Super Bowls and is going to be one of the best to play this game,” Blount said during workouts.  “I like everything about it.  It’s dynamic with Antonio Brown, with Dri Archer.  It’s going to be good.  I like it.”  Blount also gave high praise to Roethlisberger saying, “He is a really good leader.  He runs the offense the way he wants to run it.  I have seen him make some Tom Brady-like throws.  I feel like we are in a good spot.”

Blount gained valuable playoff experience last season. With the New England Patriots last season against the Indianapolis Colts in AFC playoff rounds,  Blount had a career game, rushing for 189 yards and four touchdowns. With the multi-million dollar contract Blount signed in the off season, it’s clear Bell and Blount will be on the field a lot this season. Barring injury Blount and Bell could very well be the best combo at running back in the NFL this season. Blount is primed for a great year. With 10-15 touches a game, Blount will help the Pittsburgh Steelers in running, blocking and play-action plays.

“I knew I was going to come (to Pittsburgh) with another guy,” admitted Blount when talking about Bell.  “We hit it off from the beginning.  He knows his playbook a lot better than I do.  I ask him a lot of questions, things like that…I am learning things from him on and off the football field.”  Blount described the relationship as a “good situation.”