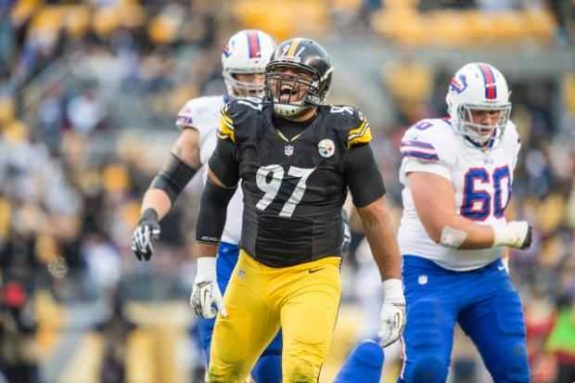 The Pittsburgh Steelers will enter training camp with six defensive ends. Three of those defensive ends are rookies with only Stephon Tuitt being a 2014 NFL Draft choice by the organization. Rumors continue to flood online sites in relation to whether veteran Brett Keisel may re-join the Steelers during training camp on July 24, but nothing has been substantiated. With a relatively young defense, Pittsburgh will use training camp as a litmus test to see where their young players are at as far as mental and physical training and the ability to pick up a Dick LeBeau system that has long proved to be difficult for first-year players to grasp.

Stephon Tuitt was drafted in the second round of the 2014 NFL Draft in an attempt to find a player that could make an immediate impact on defense. Mini-camp and training sessions have shown that Tuitt has a way to go in learning the complexities of the Steelers system. Although Tuitt started 29-of-35 games at Notre Dame there is no guarantee that the Steelers will start him. Tuitt recorded 20 sacks in his collegiate career, the fourth-most for any active ‘Fighting Irish’ player and ranked one sack shy of Mike Gann’s total of 21 (fourth in school history).

Undrafted rookie free-agent Ethan Hemer signed with the Steelers on May 10, 2014. Hemer started 42-of-54 games at Wisconsin, finishing with 92 tackles, six passes defensed and one fumble recovery. Hemer was a member of the Badgers team that played South Carolina in the 2013 Capital One Bowl.A first-team all-region, all-area and all-conference AP honors player in high school, Hemer was a team captain with career totals of 146 tackles, 47 tackles-for-a-loss and 11 sacks. Hemer stands 6-feet-6 inches and weighs 285 pounds, but is only 23 years old.

The three young men will have plenty of competition in training camp from second-year defensive ends Brian Arnfelt (Northwestern) and Nick Williams as well as four-year player Cameron Heyward. Heyward is already projected to be the starter since taking over for departed veteran Ziggy Hood. Heyward has not missed a game since starting, playing in 14 games for the Steelers in 2013 (11 starts). Heyward either finished at top of the team for quarterback pressures or within the top three among all players on Pittsburgh’s defense. Arnfelt spent most of the 2013 season on the practice squad, logging no starts and only play in two games. Unlike Arnfelt, Williams was drafted by the Steelers in the seventh round of the 2013 NFL Draft after being named All-Southern Conference first team in 2012 with Samford. Arnfelt and Williams would both like to break into the starting position at the opposite end of the defensive line from Heyward, but neither have much more experience than the three rookies.

Cam Thomas was signed to the Steelers during free agency in the offseason, but will most likely be used as a utility lineman on the defense and is listed as a defensive tackle.

Due to the lack of a defined starter outside of Heyward, rumors that 11-year veteran Brett Keisel may return to the Steelers during training camp have heated up over the past week. The Steelers want to be more competitive on defense in 2014, and Tuitt may not be mature enough to take over the reins in 2014. Keisel could provide stability and mentoring that would be a positive building block for Tuitt. Last season, Jarvis Jones was thrown into the defense early and struggled at outside linebacker, making it appear that the Steelers and LeBeau aren’t interested in having another young player lose their confidence before their NFL career even gets started. Keisel wouldn’t be likely to be offered a contract outside of one year and may not be interested in developing a player to take his place, especially in the middle of the season. A reasonable solution would be to allow Keisel to rotate in with the young defensive ends to expose them to the type of play that will be required from them. If the Steelers were to bring Keisel back, a clause in the CBA would allow them to sign him at the same cap money as a second-year player.

(article originally posted on Examiner.com under a different headline)

Wesley Johnson: Moving Around To Fit In With Steelers
LeGarrette Blount Helping The Steelers With Power And Skill