So Far So Great For Steelers’ Archer and Jones 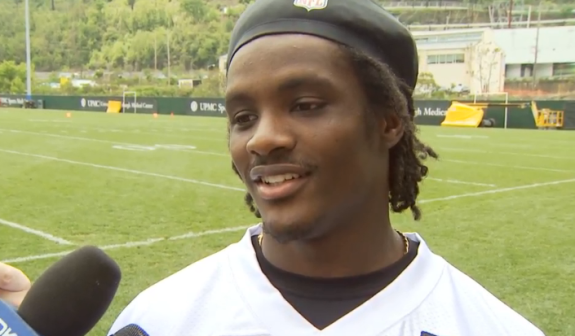 Dri Archer and Jarvis Jones are already turning heads in training camp. With speed, power and athletic moves, both are showing their teammates why the coaches see so much potential in them. It’s still early in Pittsburgh Steelers training camp, but as of now Jones and Archer dont look like players who will spend much time on the sideline this year.

Early in training camp offensive coordinator Todd Haley has already compared Archer to the All-Pro running back Jamal Charles.  Archer is showing he has running skills that expand further than just being a running back that would only run the ball on 3rd down. Archer’s speed is rare but he is showing he is more than a speed guy. Archer spent Monday working with the wide receivers. It’s expected that Archer will also work in special teams further as well. With Archer showing the ability to catch the football as a receiver, it will allow Archer to see more playing time this year. Usually with a speed guy like Archer teams run just special plays, but so far Archer is showing he is more than a gadget player. Barring injury there is no sign Archer will regress as training camp goes on.

One of the main goals for Jones in the off season was to become more physically stronger. Monday in training camp, Jones beat left tackle Kelvin Beachum with power inside moves as well as quick outside moves. Outside linebacker coach Joey Porter is already working his magic with Jones. If Jones can power through tackles as he has so far with a veteran lineman with the skills Beachum posesses, the sky is the limit when Jones will be blocked by tight ends and running backs who will not have the strength to hold a block on Jones long enough. Jones showed his quickness in his rookie season but already looks quicker this year

Between the Hashmarks: Steelers ready to take training camp to next level
Brown Lays Into Sanders – Calls Comments Towards Roethlisberger “Terrible”