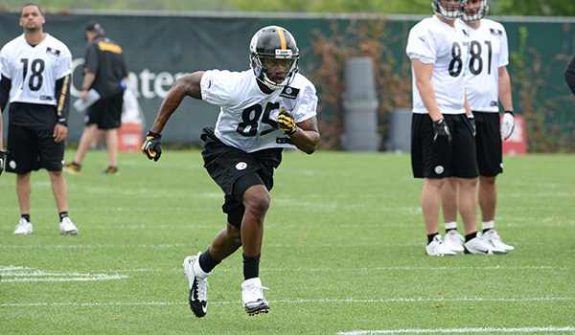 In what has been an interesting positional battle thus far for the Pittsburgh Steelers during their 48th annual training camp at Saint Vincent College in Latrobe, Pennsylvania, the wide receiving corps has been battling – hard.  Darrius Heyward-Bey came into camp looking for redemption after spending the 2013 season with the Indianapolis Colts.  Heyward-Bey was expected to bolster a group that includes Antonio Brown, Lance Moore, Markus Wheaton, Martavis Bryant, Justin Brown and Derrick Moye.

On Thursday, Heyward-Bey was shaken up on a play during the Steelers’ second practice of the day, leading to speculation amongst several members of the media at camp:

Heyward Bey shaken up in a drill against DBS. Shaquille Richardson landed on him after he dropped the ball.

Heyward Bey shaken up. Looks like he fell on ball.

No one likes to hear that there are injuries at training camp.  And all the hard play may be taking a toll.  Tight ends Matt Spaeth, Rob Blanchflower and Michael Palmer were all non-participants on Thursday. Joining them were Alvester Alexander, Jordan Zumwalt and Mike Mitchell.   Then another tight end went down – Eric Waters – who apparently injured his back per head coach Mike Tomlin.

*Mike Adams had his rear end, almost literally, handed to him by Shamarko Thomas and then by Daniel McCullers in two practices, demonstrating that Adams has a long way to go to improve his play.  Adams claimed the play by Thomas on Monday was a result of a “slip”, but it is hard to come up with excuses when you are trying to win the right tackle spot.

*McCullers is an active man and is showing monstrous potential.  During linemen pass blocking drills, McCullers was able to get leverage on Cody Wallace and then enveloped Dri Archer on an 11-0n-11 live tackling drill.  William Gay told TribLive Radio’s Ken Laird that teammates call McCullers ‘Big Dan’ after a character in the movie “The Longest Yard.”  McCullers appears to be the quiet giant, however, and teammates are encouraging him to keep moving people out of the way.

* Although the no-huddle was used a lot on offense during OTAs and camps, it has been mysteriously absent in the first four days of official training camp.  Landry Jones continues to struggle to find a rhythm and consistency as the No. 3 quarterback.