Arthur Moats: The Outsider Working His Way Into The Steelers Rotation 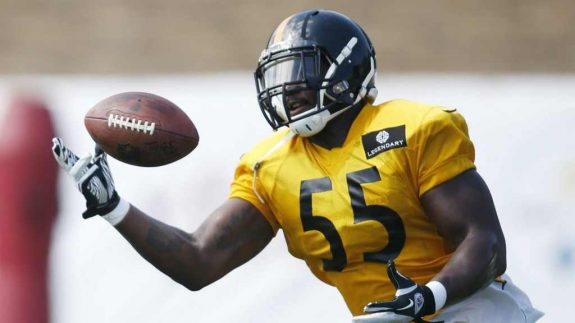 Aurthur Moats has not been discussed much this off season. However, in the Pittsburgh Steelers 49th training camp in Latrobe, Moats is creating a lot of talk with his play.

Over the past several seasons the Pittsburgh Steelers have had little depth at outside linebacker. The team lacked a pass-rusher with off the edge consistency and acquired Moats from the Buffalo Bills as a free agent. Outside linebacker coach Joey Porter continues to work his magic on Moats as he transitions to a 3-4 outside linebacker. As Moats continues to show his pass-rush ability it will work wonders for the defense. The former defensive end in college showed he had a knack for rushing the passer.

Along with proven pass-rushers Jason Worlids, Lawrence Timmons and up-and-coming linebacker Jarvis Jones, Moats will give the defense an extra push. Most offenses can not block four established pass rushers. In the 3-4, Moats will continue to be challenged by the offense tackles. If Moats continues to show improved skills he could very well pass Chris Carter on the depth chart.  Carter has been a disappointment so far with zero career sacks for the Steelers.

Moats never had a chance to shine with the Buffalo Bills but things are shaping up pretty well for Moats so far in Pittsburgh. His development will be crucial for the defense on 3rd down. His other competitors, Jordan Zumwalt and Terrance Garvin, have performed well so far but neither are at the current level of Moats. It’s very simple – the ability to get after the quarterback will get and keep Moats on the field.