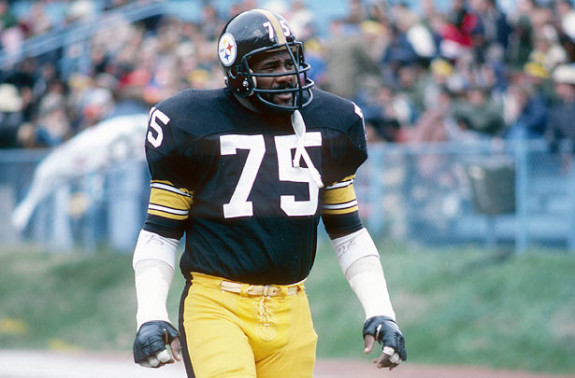 The Pittsburgh Steelers have never been a team in the National Football League that has been short of heroic and impressive stories of triumph over defeat, comebacks and players with unquestionable talent and personal achievement.  This week, during the Steelers’ 49th annual training camp at Saint Vincent College, two stories about extraordinary men have come to the forefront as the type that are not only heart-warming, but well deserved by both men; legendary Joe Greene and linebacker Sean Spence.

According to Ray Fittipaldo of the Pittsburgh Post-Gazette, “Mean” Joe Greene was asked for a meeting with Steelers team chairman Dan Rooney and president Art Rooney II earlier this year, but  what he was about to hear in the office was nothing the former ‘Steel Curtain’ defenseman, scout and coach expected.  Joe Greene had been around the organization for 27 years and the sudden meeting caught him off-guard.  “I was sitting down and I got weak in the chair,” Greene told Fittipaldo in a phone interview.  The news: that Greene’s No. 75 jersey would officially be retired this season by the Pittsburgh Steelers.  “I was flabbergasted when Dan and Art mentioned it to me.  I know what it means to the Steelers when they do something of this magnitude.  I say that because they haven’t done it in a long time.”  So long, in fact, that the last time a player’s jersey was officially taken down as an option for any other Steelers player to wear what in 1964 at Pitt Stadium when Ernie Stautner, another defensive tackle, saw his No. 70 jersey given the honor.

While Steelers trivia nuts have spent years going over what jerseys did or did not get pulled from the ranks of future wear, only Stautner’s and Greene’s jerseys will be ‘officially’ retired as of 2014.  One reason more haven’t is because there have been so many great players that were deserving, especially from the 1970s teams.  While decisions may yet be made on numbers in the future, Joe Greene chose to have his jersey retired on Nov. 2 when the Steelers host AFC North divisional rival Baltimore (Ravens) at Heinz Field.  “It was not a difficult decision as far as we were concerned because of what Joe was,” said Dan Rooney.  “This doesn’t take anything away from (Stautner).  Joe is something special.  What he did, the way he acted.  He is much deserving of this honor.”  The only other numbers the team does not issue to players are: Terry Bradshaw‘s No. 12, Franco Harris‘ No. 32, Mike Webster’s No. 52, Jack Lambert‘s No. 58 and Jack Ham’s No. 59. 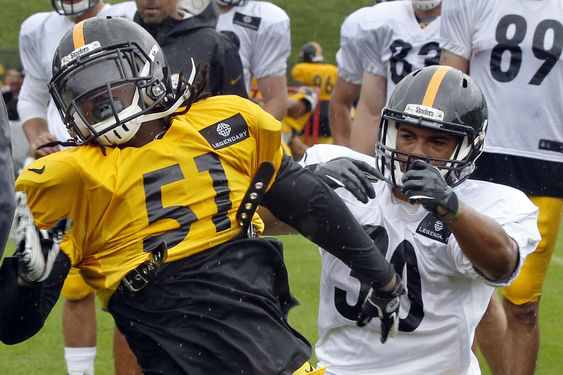 Who doesn’t like a comeback story?  Well, Steelers linebacker Sean Spence is one in the making (No. 51 above seen blocking Miguel Maysonet, No. 30).  On Monday, Spence didn’t hesitate before sprinting forward once the whistle blew and finding immediate contact with fullback Bryce Davis, essentially making a statement that he’s ready to distance himself from a career-threatening knee injury in a 2012 preseason game against the Carolina Panthers.  The injury was so traumatic that Spence doesn’t even like to revisit it in his mind, straining to remove himself from the pain and heartache that plagued him in two years of uncertainty.

Spence, 24, was ready to put all of the agony and doubts behind him when he put on the pads Monday.  “I was chomping at the bit,” Spence admitted about getting into actin in the “backs on backers” drill.  Spence throttled forward, winning some battles and losing others.  The key battle won was that Spence appears to have made it back to the game he dreamed may be lost to him forever.

Spence will continue to compete with rookie Ryan Shazier and veteran Lawrence Timmons for playing time, but he’s more than willing to do so.  In fact, he’s happy to do so.  “(The Steelers) could have given up on me a long time ago,” said Spence.  “I’m just thankful.”

Steelers general manager Kevin Colbert said the team has some money to play with under the salary cap and could sign one of its impending free agents — including linebacker Jason Worilds or cornerback Cortez Allen — to a long-term deal before camp breaks.  This could also indicate the Steelers have the money to bring in a player like Brett Keisel, who has been on the hot-cold list for potential return for several weeks.