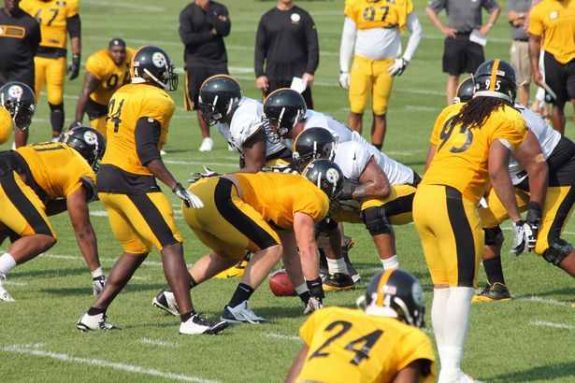 The Pittsburgh Steelers’ “Friday Night Lights” practice was the talk to the National Football League last night and early Saturday morning as the Steelers players put on a show that would make any fan wish they’d been scrumming against the Baltimore Ravens as hard as they were against each other.  If the level of intensity is any indication, Pittsburgh does not have the word “quit” in their vocabulary in 2014.

The Friday practice is held annually at Latrobe Memorial Stadium and is a highlight attraction.  Fans watched the always popular “back on backers” drill only to witness near total dominance by the linebacking corps until rusher Le’Veon Bell, who has been working back into practice after a sore hamstring, went head-t0-head with Vince Williams.  In the first play, Bell was able to get the upper hand.  Taking exception, Williams used the next play to drive Bell into the turf.  When Williams didn’t immediately release – enter teammate LeGarrette Blount in street clothes.  Blount dove in to pull Williams off of his fellow running back which caused a team-engulfed scrum that required coach Joey Porter to pull Blount out of the pile and try to reassemble some sort of order while players continued to jaw at each other.

Responses on Twitter by press who were there were immediate:

Huge fight. Bell and Vince Williams. It was ugly. Blount jumps in and porter has to pull him off

Outside of any potential injuries that could have been suffered, head coach Mike Tomlin pointed out just how emotional camp can get, especially when a team is trying to develop an identity.  “The tight ends kicked the linebackers’ butt the other day,” said Tomlin.  “The linebackers came back today with a vengeance. It’s what team development is about…It’s an emotional game and (players) do lose that element of it sometimes, but those things are growth opportunities and opportunities for us to teach.”  Tomlin added, “At times, you’re going to feel like you’re wronged, but at the same time, you’ve got to keep your wits about you because we step into stadiums with one goal in mind, to win.”  Tomlin pointed out that it is during times like what happened Friday that allows the team to talk about potential penalty situations that they’d rather address than during a game, especially when tempers get a bit heated.
Other Notes:
** Sean Spence put in another strong performance at practice, demonstrating he is continuing to improve his potential to remain on the roster.
** Due to Jarvis Jones suffering a groin injury, Chris Carter came in and played his position at OLB.
** Dri Archer (hamstring), Justin Brown (broken nose) and LeGarrette Blount did not participate in practice.
** Cornerback Shaquille Richardson left practice with a groin injury, but fellow CB Antwon Blake is showing he’s serious about creating a spot for himself on the roster with increased intensity and play.
** Running back Alvester Alexander was waived by the Steelers who then signed first-year rusher Jawan Jamison (who will wear #44)
** The Steelers have extended kicker Shaun Suisham‘s existing contract to keep him with the team through the 2018 season.
If you haven’t been following our updates on Twitter, please do @steelersgab
Want to talk to other die-hard Steelers fans about training camp or player news?  Join our forum at  GridirionChatter.com for free and jump right in.
Related Topics2014 Steelers training campAlvester AlexanderAntwon BlakeChris CarterJarvis JonesJawan JamisonLe’Veon BellLeGarrette BlountSean Spenceshaquille richardsonShaun SuishamSteelers camp reportSteelers injury reportVince Williams