Stephon Tuitt: The Pittsburgh Steelers Rookie On A Mission 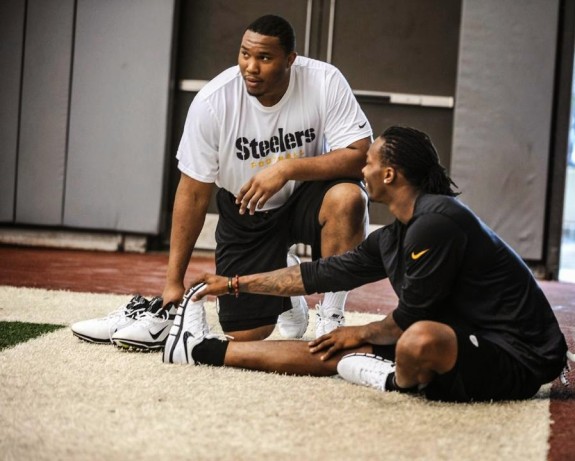 Stephon Tuitt is not known for saying much. Usually NFL rookies don’t don’t receive much attention in training camp. Tuitt however has had some very impressive practices lately with the Pittsburgh Steelers.

Tuitt has received much praise from coaches and players. ” He has a long rangy athletic body,” said offensive guard David Decastro – a very special statement for a 6’5″, 304 pound offensive lineman. Tuitt has shown in camp that he has a high motor and a nose for the ball. Tuitt has also been in great shape. As of now, Tuitt has been mostly on second team reps ,but he has also played some first team reps. Because of Tuitt;s athleticism he is a candidate to play some snaps standing up on stunt defenses. As training camp progresses, it will be interesting to see how Tuitt matches up against Kelvin Beachum, Michael Adams,Wesley Johnson, Guy Whimper etc. On the recently released roster, Cam Thomas is projected to start ahead of Tuitt

The Pittsburgh Steelers did not select Tuitt in the second round of the 2014 NFL Draft for him to be a career backup. “We will play him as much as we can,” defensive line coach John Mitchell said. Tuitt will recieve a fair amount of playing in the first preseason games. If he continues to progress, at the very least Tuitt will play meaningful snaps as the top backup defensive end off the bench. When first drafted Tuitt was expected to be a week one starter. While that is clearly not set in stone, Tuitt is obviously on his way.