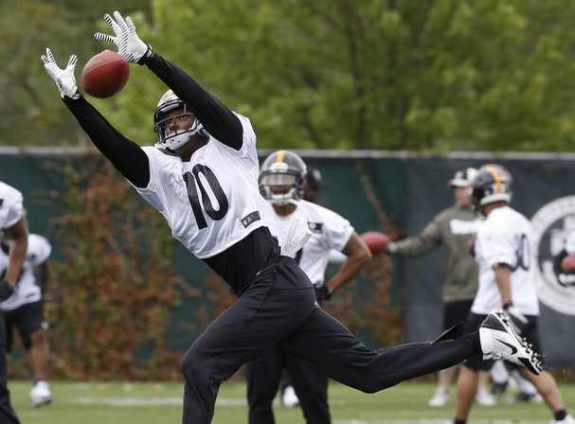 One of the hottest competitions during the Pittsburgh Steelers’ 2014 training camp has been between wide receivers.  While veteran Antonio Brown has solidified his position with the team, conflicting reports have come out of camp about rookie Martavis Bryant ahead of the first pre-season game the Steelers will play against the New York Giants at Met Life Stadium on Saturday.

Early indicators are that although the team feels Bryant will eventually be able to contribute, it may not be as soon as Saturday.  Further complicating the wide receiver battles is that the Steelers were willing to bring in yet another receiver, James Shaw who most recently played in the Arena Football League for the Pittsburgh Power, and waive Danny Coale.

In a lot of 11-0n-11 drills, quarterback Ben Roethlisberger has targeted Antonio Brown the most, but the veteran will most likely draw the best defensive backs of the Steelers’ opponents this season, making it a reality that the young wideouts on the team need to prove themselves at the NFL level during pre-season games.  Markus Wheaton and Justin Brown have both come on strong in camp.  While the consensus seems to point to Bryant making the final roster, the 6-foot-4 rookie from Clemson has had ups and downs at camp.

While Bryant dominated in a red drill zone late last week, his biggest weakness in college and now at camp has been inconsistency.  There have been times when Bryant would show flashes of being dominant, he also ran incomplete or incorrect routes, had difficulties blocking off the line and trouble with dropped balls.

If the Steelers keep five receivers, as expected, that means that Bryant may now be in competition with Justin Brown, Darrius Heyward-Bey (who has had injuries during camp) and Derrick Moye for a final spot, leaving Antonio Brown, Lance Moore and Markus Wheaton ahead of him.  As coach Tomlin likes to say, the “ebb and flow” of the game often shows where the most improvement must be made with players.

ESPN analyst Todd McShay seems to agree that Bryant has an opportunity to contribute early for the Steelers, but has his own concerns.  “(Bryant) does a really nice job of getting off the line and he’s a vertical route runner,” said McShay.  “There’s some boom or bust there, but when you get (Bryant) in the fourth round you’re not worried so much about the risk factor.  If (Bryant) focuses and does all the right things he could wind up being a real steal from this (2014 Draft) class.”

Bryant started only one season at Clemson and spent most of his time behind DeAndre Hopkins and Sammy Watkins.  That has led Steelers head coach Mike Tomlin and receivers coach Richard Mann to push Bryant.  “Probably had he played more [at Clemson], stayed for another year, he would have been a first-rounder for sure.  I think all that he needs to learn we will teach it to him,” said Mann.  “He was inconsistent catching the ball but he also makes tough catches and he can adjust to the ball below his waist, over his head, behind his body.”  Mann would not speculate on just how much of a role Bryant would impact the Steelers’ offense as a rookie.

The positive and negatives seem to point that Bryant may not be prepared to be used in a significant way against the New York Giants.  Bryant also has to become more mature and responsible with running the appropriate routes and controlling the ball.

The last time the Steelers pulled a physically gifted wide receiver from the fourth round (2005) of the NFL Draft was Fred Gibson, and he didn’t make it out of training camp.  Second-round receiver Limas Sweed (2008) out of Texas caught only seven career passes for Pittsburgh, and his chronic issues with dropped passes forced the Steelers to release him two years later.

Bryant is young and has the potential to be great in the NFL, but he’ll have to earn the respect of his coaches, Roethlisberger and his fellow teammates if he wants to get the opportunity.