Grading The Aftermath Of The Steelers And Giants Clash 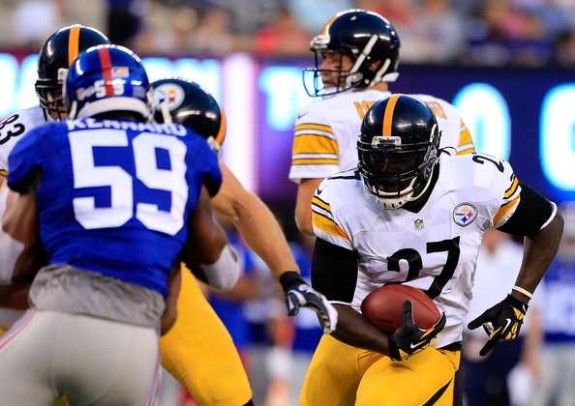 Running back LeGarrette Blount #27 of the Pittsburgh Steelers carries the ball against the New York Giants during a preseason game at MetLife Stadium on August 9, 2014 in East Rutherford, New Jersey.

The Pittsburgh Steelers suffered their first loss of the preseason to The New York Giants, 20-16, on Saturday Night. The game was not very flashy although there were some big plays and this game was mostly for the backups to shine. In this this game some of the backups played well such as Howard Jones and Daniel McCullers. Overall the loss was a disappointment but there are many things for players to build on.

Going into this game it was clear the plan was to see which backups would stand out.  On offense, not a lot, if any, trick plays and aggressive plays were called. The defense, however, did blitz multiple times during the game, a trend that should continue. Special Teams and coaching was pretty straight forward: no onside kicks, kickoff reverse hand-offs or such.  The biggest reason the Steelers did not outperform the Giants is that they were unable to get more points on the scoreboard with their offense.  To give Pittsburgh credit, they sent their second and third string players in very early in the game against a Giants team that kept their first teams on the field for most of the first quarter. Grade: C

Offense: The first team looked fluid from the little playing time they received. Ben Roethlisberger only threw two passes. Running back Dri Archer had a splashy 46-yard play that set up the field goal that allowed Shaun Suisham to put the first points on the scoreboard for the Steelers. Wide receiver Martavis Bryant had two pass interference calls go his way downfield but also had some trouble hanging onto the ball, as did fellow wideout Derek Moye. Backup quarterback Bruce Gradkowski completed 8-of-12 passes for 66 yards, but didn’t lead the Steelers to any scoring drives. 3rd-string quarterback Landry Jones did not wow anyone, but he did lead the Steelers to two scoring drives. Pittsburgh’s running game did very little. Le’Veon Bell only played a few snaps. Backup rushers like LeGarrette Blount mainly carried the load but made no outstanding plays. No one from the tight end position shined in the passing game. The offensive line was called for a few holding penalties. Overall more consistency was expected. Grade: C

Defense: Up and down night for the defense overall. Making some good plays the Steelers defense was called on to have to carry a struggling offense and up their game. The 73-yard touchdown run in the first quarter was a negative for special teams defense, especially. The defense were able to force multiple 3 and outs, but the defensive line had an up and down night. Stephon Tuitt played well as he continues to push for a starting spot. Jarvis Jones had a nice sack in the first half and is a nice improvement in his play considering he will be counted on to rush the passer a lot in his second season. Chris Carter did a great job pressuring quarterback Ryan Nassib which led to a Giants fumble. Linebacker Howard Jones did a great job recovering the fumble and scoring. Defensive Tackle Daniel Mccullers and linebacker Sean Spence looked impressive in limited playing time. In the secondary, the safeties stood out. Mike Mitchell and Shamarko Thomas had some very physical hits. The cornerbacks did not allow any big passing plays down the field.  Giving up the final touchdown late in the fourth quarter was the biggest negative, but was mainly due to the Steelers having defenders on the field that are fighting for a position on the team, even if it is on the practice squad. Grade: C

Special Teams: Most of the points came from the special teams units. Bryant muffed a punt, but recovered it. On the positive side, the special teams recovered a put return fumble against the New York Giants. Archer never had much of a chance to show his skills as a punt or kick returner.  Even though the Pittsburgh Steelers made three field goals, Suisham did unexpectedly miss one that could have been critical for the team. Whether it was due to the new preseason experiment by the NFL to move field goals back further or not is not clear. Grade: C+

Expectations for Steelers over Giants in preseason game one simple: Win
Gilbert: The Big Man And The Steelers Closing In On A Bigger Deal