Expectations for Steelers over Giants in preseason game one simple: Win 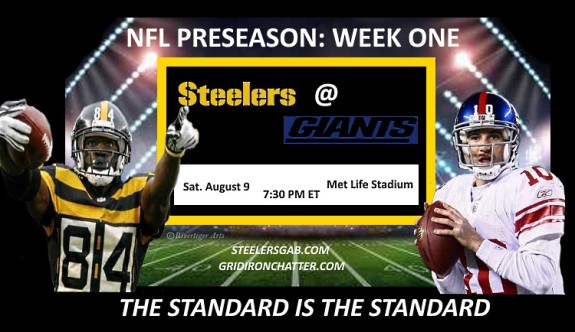 The Pittsburgh Steelers aren’t headed to Met Life Stadium to face the New York Giants to play a backyard pickup game on Saturday, August 9.  They are marching onto that field to put every single member of their preseason roster to the test, and the expectations are high.  2014 is the year that the Steelers want to re-emerge, returning to their winning ways and making sure they play to the standard the organization, team and coaches have set.  Regardless of it being a preseason game, they want the scoreboard to reflect a win.

“What we’re looking for in this first time out really is quite simple: I want the group to play fast, I want them to play with the urgency that’s required to play winning football in a stadium setting,” said Steelers head coach Mike Tomlin in his pre-game press conference. “I’m looking for that. We’d like to keep penalties to a minimum, we’d like to play assignment-clean football, but at this stage of the journey we’ll see where we are in that regard. But what’s paramount is that we play fast and we play hard and we play with urgency.”

While playing time is a critical piece to an athlete’s development, coach Tomlin isn’t putting a specific number of snaps on any one player, including rookies.  Depending on the outcome of the first couple of series’ for both the offense and defense, tradition holds for Tomlin and his coaching staff in general to pull out the first teams and send in the primary backups in each position.  Performance will be a gauge of how much time a player may stay on the field, especially if they are in a critical battle on the depth chart or trying to make the final 53-man roster.

“Everyone who’s healthy will participate in the football game. We have a number of guys who aren’t healthy right now, but we’re going to leave the light on for those guys. We’re going to wait until the 11th hour before making decisions whether to play some of them,” Tomlin said. “But our goal is to get full participation to get those guys off to a good start and show what they’re capable of and move forward with the developmental process of our team.”

Tomlin added, “I’m always the-healthy-guys-play type of a coach. The preseason is very necessary to develop regular season readiness and cohesion, and the only way to do that is to play. I’ve been the same dating back to 2007 in that regard. If they’re deemed healthy and ready to play, I’d just as soon get that first play out of the way so we can move on with the process.”

Six players are questionable for performance in Saturday’s game, but will be evaluated Friday:

“During the offseason I got a better understanding of the defense and certain techniques that I needed to learn,” said cornerback Antwon Blake.  “I got to learn at my own pace, not be thrown into the fire and rush and have to learn too quickly.”

“When you put on the black and gold you represent the State of Pennsylvania, the City of Pittsburgh and you better be ready to bring it.” – Defensive end Cam Heyward.

At the annual Hall of Fame Game in Canton, Ohio, last week, New York handed the Buffalo Bills a 17-13 lackluster game.  Quarterback Eli Manning looked rattled, going three-and-out on their first drive before Manning was strip-sacked on the opening play of the second series.  New York marched 80 yards on 12 plays in their third series, mainly with the aid of rookie running back Andre Williams who ran for 48 yards and finished with a three-yard touchdown.

Williams is battling offseason free-agent pickup Rashad Jennings for the starting running back position.  Against the Bills, Jennings rushed for 23 yards on seven carries.

David Wilson‘s story is possibly one of the most heartbreaking in the league this past week after the 23-year-old was injured and test results indicated that his surgically repaired neck,  a fusion surgery that took place in January, would prevent him from playing in the NFL.  “At a young age I had a dream to play in the NFL,” Wilson emotionally stated in a press conference Wednesday.  “I did that.  I played in the NFL and I scored touchdowns and I broke tackles and I broke and set records.  I practiced with my teammates, got to play for coach Coughlin, got drafted by the Giants.  So at no point should anybody feel like this is over because in life everything has obstacles.”

Join the staff of Steelers Gab, Giants Gab and Gridiron Chatter to watch and discuss The Pittsburgh Steelers and the New York Giants on Saturday, August 9, 2014 right here on this event wall on Facebook!!!

Everyone who attends and participates in the discussion on Facebook will be entered into a random drawing to win an NFL (Giants or Steelers) prize (to be announced on our Facebook wall at Steelers Gab and on GridironChatter.com following the game).

Invite your Steelers and Giants fan friends to join us!

Steelers’ Daniel McCullers: The Big Rookie Primed For Big Impact
Grading The Aftermath Of The Steelers And Giants Clash