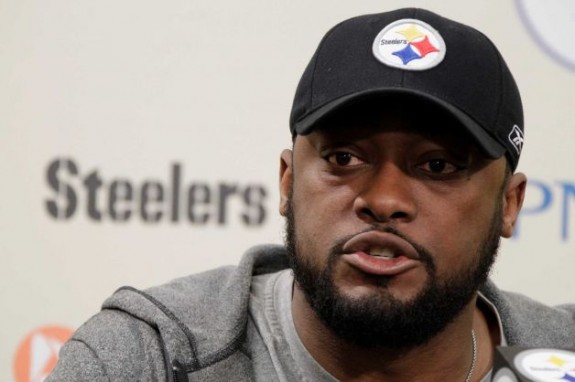 Pittsburgh Steelers head coach Mike Tomlin may not show a lot of emotion at times, his demeanor often one of reminiscence.   At other times, he looks like one of the players along the sidelines.  During Saturday’s game at Heinz Field against the Buffalo Bills, Tomlin was so excited that he chest-bumped rookie Ryan Shazier.  Or was it assistant defensive coach Joey Porter?  And in the case of the 19-16 preseason win, it may not matter because after the game – in his post-game interview- Coach T was pretty much all smiles.

“First, it’s good to get a win,” said Tomlin.  “We acknowledge that there’s some positives and negatives that is usually associated with preseason football.  But there are a lot of things (to) build upon for this…We’ll attack the corrections with the understanding that a short week in terms of getting ready for Philadelphia.  We need to keep the growth and development of this group moving in the right direction.”

Some of the things that went well for the Steelers against the Bills was the ability to get the first-team more reps in a game setting and run the no-huddle.  Defensive turnovers, including the Shazier interception and the Vic So’oto strip of Buffalo’s Jeff Tuel, were something that has been missing from Steelers football for awhile.

Obvious areas of work would include: penalties (especially of the nature Mike Mitchell received for ‘taunting’), missed tackles and missed opportunities on defense that kept the offense off the field.

As for the way the no-huddle offense looked, Tomlin said, “I did, I did.  It was an appropriate time to work on it.”  He said that against the New York Giants, the team wanted to “scavenge” their defense using the run.  “But we wanted to get Ben (Roethlisberger) some quality work (against Buffalo) and particularly the no-huddle and the comforts of Heinz Field…and they did a nice job executing that as well.”   Read more…