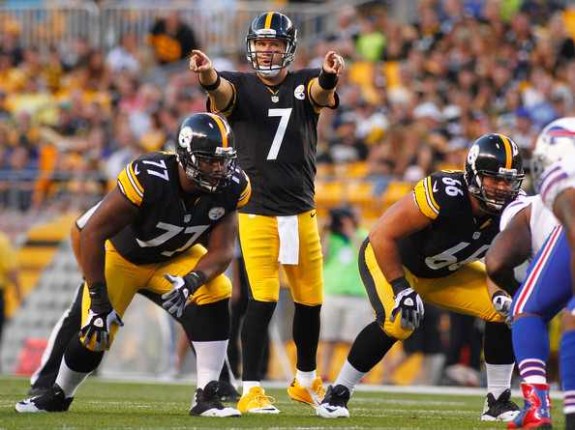 The Pittsburgh Steelers spent time during the week before Saturday night’s preseason game against the Buffalo Bills practicing against that very same team. The training paid off. Before the crowd at Heinz Field, the Steelers gave glimpses of what their final product may end up being for the 2014 NFL regular season. While it is too early to stamp ‘approved’ on what they have going for them, a 19-16 win and some outstanding plays make it appear that between final practices at the South Side facility and September 7 will be used to iron out the final wrinkles in a team that is definitely faster on both sides of the ball.

One of the biggest stories of the night was the performance the Steelers got out of rookie inside linebacker Ryan Shazier, the Steelers’ first-round draft selection this year. Nine hard-hitting tackles with the defense was added to two on special teams. His interception of E.J. Manuel in the Bills’ second offensive series, stepping in front of the intended receiver Scott Chandler, resulted in Shazier hustling 27 yards, setting up a Steelers nine-play scoring drive.

There were plenty of things that the Steelers will continue to need to focus on. There were missed opportunities by the offense when Ben Roethlisberger wasn’t behind center, rushing for a mere 35 yards on 18 attempts to set backup quarterback Bruce Gradkowski as the rushing leader on the night (3 attempts for 17 yards). The defense allowed the Bills to convert more third downs, forcing them to remain on the field instead of making a transition back to offense. The Bills were able to control the clock for most of the game, giving the Steelers ten less minutes for the offense to put points on the scoreboard. Taunting the opponent will be addressed most likely as one of the most ridiculous penalties to garner, as Coach Tomlin is one who is never happy with anything that lets control of the game get in the way.

With the win, the Steelers have at least pushed the monkey over last year’s preseason off their backs. Roethlisberger looked almost elegant when he found Markus Wheaton in the back left corner of the end zone. Wheaton not only faked out his lone defender with a hitch move, but had the instinct to get his feet down inside the white lines and maintain possession, making it the first red zone conversion of the night for first team.

Antonio Brown‘s 76-yard touchdown off of a Roethlisberger toss on Pittsburgh’s second play from scrimmage to was a highlight reel play. Brown slanted across the center of the field and then proceeded to handily outrun Bills defensive backs.

While rookie running back/wide receiver Dri Archer didn’t get much yardage on the ground, he was second only to (Antonio) Brown in receptions. Archer took two passes for forty-four yards. The longest was a forty yard scamper that, had one man not been able to force him out of bounds, looked like a 100-yard dash to the end zone.

With time running out in the fourth quarter of the game, it appeared that all the quickness of both the Steelers’ defense and offense was not going to get them out of an overtime period due to a 16-16 score. The Bills had possession of the ball with 43 seconds left on the game clock, but Terence Garvin, Vic So’oto and Howard Jones decided to put exclamation points on the Bills not running out the clock or scoring. On second-and-one at the Buffalo 38 yard-line, Garvin got to Bills quarterback Jeff Tuel, sacking him for a loss of three yards. Standing in shotgun, Tuel had no hope against So’oto when he bull-rushed his way untouched and dislodged the ball. All Jones had to do was scoop it up for the Steelers to take possession at the Buffalo one yard-line, setting up a Shaun Suisham field goal to win the game as time expired.

Roethlisberger finished the night completing eight of 11 passes for 128 yards and two touchdowns. Landry Jones continued to struggle, completing two of five passes and losing an interception. Gradkowski went seven-of-13 for 47 yards and one interception.

Manuel completed 17-of-27 passes for 148 yards and an interception, but played the entire first half for Buffalo. The Bills offense were unable to find the end zone.

What were your takeaways from the Steelers’ second preseason game in 2014?  Who do you think should be given the game ball for the win?  Let us know by logging on to our forum at GridironChatter.com for free today!

(article originally published by author on Examiner.com under a different headline)