Analysis of the Steelers 2014 roster and practice squad 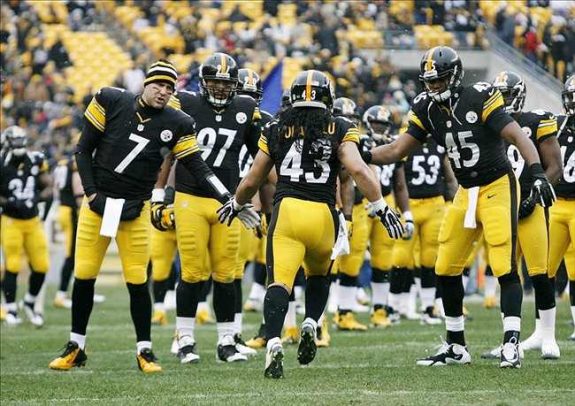 The Pittsburgh Steelers spent eight months analyzing the players on their 2013 roster, their 2014 NFL Draft selections, free agents brought in during the offseason and players brought in to training camp and their 2014 preseason games. On Saturday, the Steelers released their initial 53-man roster and then the ten players they placed on their practice squad were announced Sunday.

While General Manager Kevin Colbert and head coach Mike Tomlin will most likely keep their eyes on the waiver wire around the league, they are settled thus far with the players they’ve placed on the initial roster.

It wasn’t much of a surprise to see Ben Roethlisberger and Bruce Gradkowski listed as the Steelers quarterbacks. The battle during the preseason between Brendon Kay and Landry Jones, however, was one of inconsistency. Jones came out as the third man on the depth chart, possibly due to the fact that he completed 14-of-18 passes for 97 yards against the Carolina Panthers. Jones has not shown what Mike Tomlin called “consistent, above-the-line play,” so the jury is out on whether the Steelers will watch for a quarterback that will be waived by another team.

There were no surprises along the offensive line. Offensive line coach Mike Munchak spent the majority of his time with Mike Adams, Kelvin Beachum, David DeCastro, Marcus Gilbert, Ramon Foster and Maurkice Pouncey. Chris Hubbard spent all of the 2013 NFL season with the Steelers on the practice squad and will be a backup guard. Cody Wallace and Wesley Johnson showed enough during the preseason that Munchak lobbied to keep nine linemen, but only Gilbert, Beachum and Adams are listed as tackles.

After releasing or cutting most of their running backs after inefficiency in 2013, the Steelers brought in veteran free agent LeGarrette Blount during the offseason. They also nabbed undrafted rookie free agent Dri Archer. Le’Veon Bell earned the starting position in the middle of the 2013 season and looks to carry most of the rushing load for Pittsburgh in 2014. Will Johnson will retain his position at fullback.

The Steelers had quite a battle at wide receiver during the preseason with several players battling for a roster spot. Veteran Antonio Brown will be joined by veteran free agents Darrius Heyward-Bey and Lance Moore. Possibly due to inconsistent play, Derek Moye did not make the final roster opening up the way for Justin Brown, Markus Wheaton and rookie Martavis Bryant to take the final spots on the depth chart.

At tight end, the Steelers will stick with three proven players that have spent time with the team; Heath Miller, Matt Spaeth and Michael Palmer. Many were surprised to see rookie Rob Blanchflower bumped off of the final roster, but Palmer’s special teams play showed his versatility and value to Pittsburgh.

The defensive line had one of the biggest shakeups during the offseason as the Steelers looked for a stronger defensive front, the ability to get to the passer and stop the run. Rookie defensive tackle Daniel McCullers had a good preseason and camp and earned a spot on the final roster. He is joined by Brett Keisel who was re-signed just before the Steelers’ final preseason game. Cam Heyward, Steve McLendon, Cam Thomas and 2014 draft selection Stephon Tuitt make up the rest of the line.

The Steelers brought in former linebacker Joey Porter to assist them in developing a quicker, more efficient corps at that position and Pittsburgh decided to keep a total of eight. Veterans Lawrence Timmons and Jason Worilds will line up with Terence Garvin, Sean Spence, Jarvis Jones, Arthur Moats, Vince Williams and Ryan Shazier. Rookie Jordan Zumwalt, a Steelers’ sixth-round pick (No. 6a) has been placed on the injured reserve list where he will most-likely spend the 2014 season.

Showing they recognized the necessity to create a more effective defensive secondary, the Steelers chose to keep 11 on the roster. Troy Polamalu and Ike Taylor will be joined by Cortez Allen, Will Allen, Antwon Blake, William Gay, Brice McCain, Robert Golden, Mike Mitchell, Shamarko Thomas and recent addition, B.W. Webb. That means that the Steelers will have five safeties and six cornerbacks on the roster. 2014 draft selection Shaquille Richardson struggled with issues that hampered his performance and bumped him off the depth chart.

Special teams ‘specialists’ have been a concern during the 2014 preseason. Long-snapper Greg Warren had meniscus surgery on his knee but appears to be ready to for the season opener. Shaun Suisham will return as the place kicker. Brad Wing has shown a lot of inconsistency in the preseason as the punter and there may be a change made at that position if someone more reliable shows up on the waiver wire.

(article originally posted by author on Examiner.com under different headline)