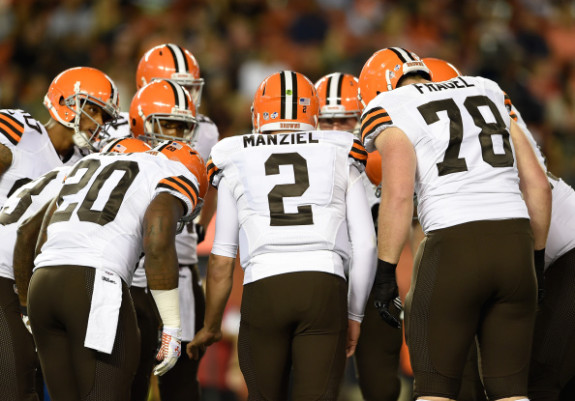 They have had a revolving door of coaches, GM’s, and players, and most seasons the Steelers use the Browns as whipping boys in the AFC North. They hope that Sunday all that stays the same, as the Browns comes to Heinz Field with yet another new look in the lid lifter to the 2014 season.

Last season the Steelers laid an egg against the Titans in the opener 16-9, even after getting a 2-0 lead on the opening kickoff. Sunday they hope to recover opening day magic against a Browns team that won four games in 2013. With that, here’s our quick scouting report on the Browns.

Offense: QB Brian Hoyer is back under center after holding off rookie wonderboy Johnny Manziel and he gets his shot to be the day one starter after winning 3 starts last season. The team has no great deep threat with Josh Gordon suspended for the season, and TE Jordan Cameron is their surest player that can catch the ball. The run game will see a steady dose of new RB Ben Tate, who runs behind a line anchored by center Alex Mack and LT Joe Thomas. The offense as a whole is going to be their weak point, and it will be up to the line and Tate to provide much of a spark.

Defense: Can be stingy, with a secondary and backfield with some solid players, with Joe Haden leading the way and rookie Justin Gilbert due to see time at the other corner spot. Donte Whitner will line up at strong safety, while Tashaun Gipson will be the free safety. The line is now a 3-4, and their 3 big bodies up front are led by , Ahtyba Rubin. The 4 LB’s leave a lot to be desired, and the team is hopeful that last seasons first-round pick Barkevious Mingo will start to show off some of the talent they felt they were getting. The defense is better than the offense, but has a long way to go.

Special Teams: Billy Cundiff will handle the Browns kicking duties heading into 2014, and he’s in his second season after the team needed a replacement starting 2013 for the reliable Phil Dawson. Cundiff is solid, not a huge leg but good 35 and in. Spencer Lanning handles the punting duties, and again is marginal, nothing to brag about but will put up about a 40 net avg this season for the Browns. Their kick return and punt return duties will be to Travis Benjamin for punts and Taylor Gabriel will see time returning kickoffs.