Will The Steelers Get A Taste Of ‘Johnny Football’ Sunday in the Opener? 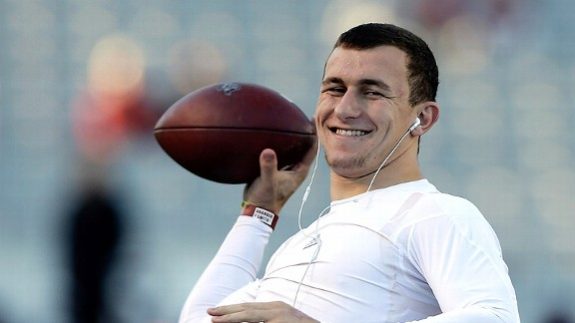 Will the Steelers see wonder kid rookie QB Johnny Manziel on Sunday when the Browns come to Pittsburgh to kickoff the 2014 season?

A simply answer by the black and gold head coach spoke volumes on Tuesday.

“When you have a talent like Johnny Manziel, you’re going to get him on the field,” coach Mike Tomlin said.

There was no doubt from day one that the Steelers were going to see Manziel, and it appears the Steelers are in full ‘Manziel Mode’ for Sunday’s AFC North showdown.

Defensive coordinator Dick LeBeau said back in early August that he felt Manziel would be the starter for the week one battle, and while that’s not going to be the case, there’s still a feeling that the former Texas A&M star QB will be on the field at some point.

Browns new head coach Mike Pettine knows that the Steelers will be prepared if they use ‘Johnny Football’ Sunday.

“I would think that they’re smart enough to know, and they’ve talked about Johnny and what he brings to the table,” Pettine said.

“I would think that any defensive coordinator that we play, especially early on until we’re kind of more of a known quantity, will prepare for all eventualities.”

There’s no doubt that Manziel is going to be ‘the man’ at some point during the 2014 season. The question is, will it be on a gradual basis, or will it be all at once if the Browns struggle with current QB Brian Hoyer.

Frankly Tomlin, LeBeau and the Steelers don’t care about the future of the Browns QB position, all they care about is if they will see #2 Sunday, and making sure they are prepared for whatever Manziel will bring to the table.