LeBeau Thinks Manziel Starts For Browns Week One Vs. Steelers 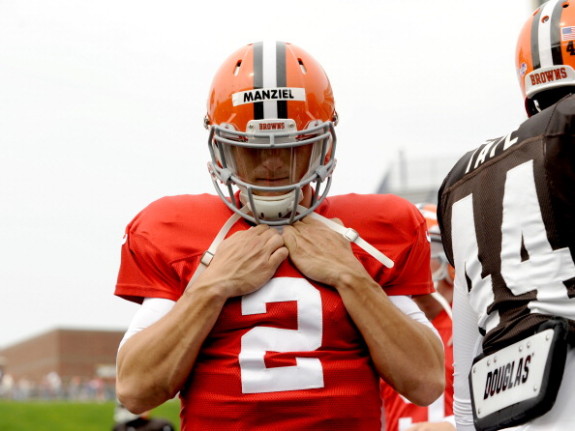 Mind games? Maybe a little gamesmanship from one of the great defensive coaches of our time?

Call it what you want, but Steelers defensive coordinator Dick LeBeau knows how to get things riled up, even talking in that small, soft tone that carries one of the biggest sticks.

Today LeBeau declared that he and the Steelers defense are getting set for a Browns QB in week one who has never started a pro game, yet one that is getting more mainstream coverage than about 90 percent of the established players in the game.

That of course is rookie QB Johnny Manziel, who LeBeau says he thinks the black and gold will see come week one in Pittsburgh as the Browns come to town.

LeBeau wasn’t shy about thinking Manziel will be under center for the Browns once they take the field in Pittsburgh.

“I’m expecting Manziel to be the starter,” LeBeau told Cleveland.com on Monday. “That’s what I’m expecting. What he did in college is not an accident. He did it often enough against good teams.

“I think he is going to be a handful for all of us. You watch all his games and he created plays, he made plays, he kept plays alive. He has the ability to see people and the touch with the football to get it in there late in the down. I think he will be successful at this level.”

Many media in Cleveland seem to be pushing for Manziel to be the starter, and if he does, it plays right into the Steelers hands, as they have been very good with LeBeau running the defense against rookie QB’s.

While in Cleveland they say it will be decided who plays QB in the four preseason games, don’t be surprised if we see Manziel under center week one.

Stephon Tuitt: The Pittsburgh Steelers Rookie On A Mission
Jawan Jamison: The Longshot Looking To Make A Quick Impact With The Steelers