Steelers Facing A Better Browns Team This Time Around 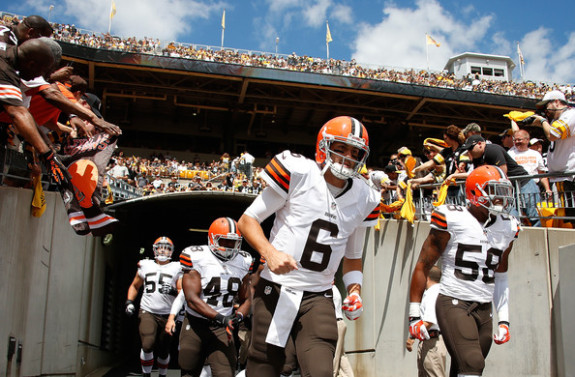 The Cleveland Browns had questions at quarterback,and receiver. Brain Hoyer has stepped up his game ending any quarterback controversy with Johnny Manziel. Wide receivers Andre Hawkins, Talyor Gabriel, Miles Austin and tight end Jordan Cameron have turned out to be a formidable receiving corps. Rookie running back Towson West has had some success thus far in the NFL as he and Ben Tate are looking more and more as a good duo. The defense has also shown itself to be a strong, especially in the second half of games.  Joe Hayden is still one of the best corners in the game and will be looking to redeem himself from the first match up against wide receiver Antonio Brown.

The Pittsburgh Steelers must be aware this time around that the Cleveland Browns are a 60-minute team with all of their wins being comeback wins.  The Steelers must do a better job pressuring Hoyer as he has proven he can be very consistent throwing from the pocket. Also, Hoyer can scramble so the defensive must hit him consistently. If the Steelers have a lead late in the game they must learn to run the football effectively. It will burn time and not allow the Browns to throw the ball around much in the second half, decreasing their chance to score much. The Steelers offensive line must do a better job blocking in the red zone and 3rd-and-short situations. It will be great if the Steelers have a lead in the fourth quarter as they have had in four of the five games this season.  It will show they are continuing to improve. But they must have the right play-calling and determination to finish.

Rivers: Fan Chat Transcript With Steelers Gab
Steelers vs Browns: Look Closely Into The Talent Of Both Teams