Steelers vs Browns: Look Closely Into The Talent Of Both Teams 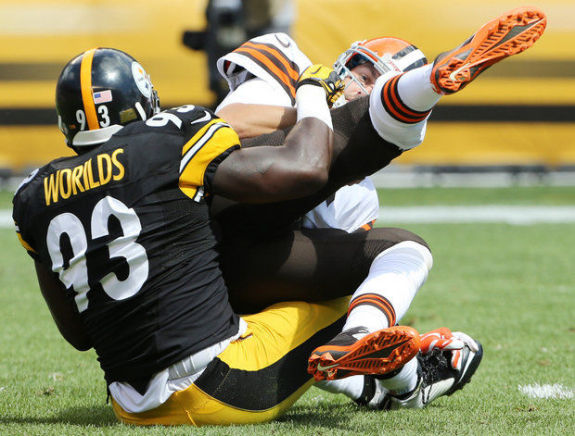 Both The Pittsburgh Steelers and Cleveland Browns offense and defense are a work in progress. Both teams have players to build on and some they are still looking to develop.  Week six should be an interesting Steelers vs Browns matchup.

Antonio Brown is a star wide receiver. The Brown and Ben Roethlisberger combination gets better every game. Markus Wheaton is the x-factor to the offense.  Every good quarterback needs at least three consistent targets. Right now the Steelers have Brown and tight end Health Miller. Wheaton must improve as it will open up the offense on both sides of the field, allowing running backs Le’Veon Bell and LeGarrette Blount more running lanes to work with. The Steelers offense must  finish in the fourth quarter.

Brain Hoyer is their man at quarterback. They have two good running backs in rookie Towson West and veteran Ben Tate. The Browns have a collection of good but not outstanding receivers who work well with Hoyer. Left tackle Joe Thomas is one of the best in the game. The Browns offense is better in the second half than the first half of their games in 2014. This offense goes as the running games goes. It allows Hoyer to be effective on play-action and misdirection pass plays.

When the defensive line is active, the Steelers look like the defense of the past.  Defensive linemen Cameron Heyward and Steve McLendon are improving week by week. More pass rush will be needed from outside linebacker James Harrison as he works himself into football shape. Cornerbacks Cortez Allen and William Gay must play at the level they did last week versus the Jacksonville Jaguars. Outside linebacker Jason Worilds must be a premier pass-rusher in this game opposite Arthur Moats.

Defensive end Jabaal Sheard is the Browns’ best pass rusher. Outside linebacker/defensive end Paul Kruger is a versatile pass rusher and run stuffer as well. Cornerback Joe Haden is a very good corner with great ball skills.  Gilbert must grasp the mental part of the game and be a more willing tackler especially in run support. Linebacker Karlos Dansby is a calming presence in the middle with his sideline to sideline ability.  Dansby is one of the best coverage middle linebackers in the game.