Brown, Gay and Roethlisberger Talk After The Browns Loss 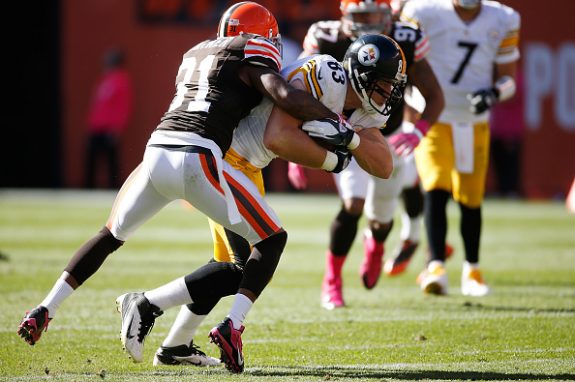 On the offense not consistently scoring:

“We have to execute better. No excuses. Every man to a man has to find a better way to execute. We need better detail on our assignments.”

On the play of QB Ben Roethlisberger:

“It’s not on Ben.  It’s on us, every man to man. We have to find ways to produce and find a way to get better.”

On if he is still confident in his team:

“Absolutely confident in my team. We can’t get down. Keep working and get better.”

On if he is still confident the team is ‘going about it’ the right way:

“I’m not giving up, everyone is fighting to the finish. We are commited to detail in our work.”

On his past success against DB Joe Haden but not getting involved early:

On what the most important thing to do is for the Steelers moving forward after a game like this:

“There’s a game next week. If we dwell on this game too much, we’re going to forget about the next one. We just need to correct our mistakes and move on to next week.”

On TE Jordan Cameron beating them on deep passes today:

“They always did the misdirection and we worked on that. We knew what type of offensive coordinator we were going against. They made the play and we didn’t.”

On the Browns being able to make plays on offense today:

“They executed way better than we did and that’s the bottom line. Give credit to them. They came out and executed their plan.”

On how he played:

On if he knows why he is struggling:

“Nope. Just need it to get better.”

On if he is convinced of the strategy coaching is trying:

“I don’t know. We can all look at that on film, coaches will look at it. We tried to run it in the red zone today and when we got down there we just couldn’t quite get it all the way in. We’ll look at it and figure out this execution and figure out what it is.”

On why he wasn’t able to score in the red zone:

“It’s hard to answer that question without looking at the film, I have my back turned a lot after I hand it off. We’ll have to look at it. I’m not really sure, to give you an accurate answer right now.”

On if he calls most of the plays in the red zone:

“No, well, it depends. It honestly depends on the mode and what the situation is.”

On if the Browns defense made changes since Week 1:

On what he didn’t like about the game today:

“A lot of it. I’m going to go back and help give you a more accurate answer when I look at it. Just missing throws and the missed play calls at times, it just needs to get better. I hold myself to a higher standard and I have to be better.”

On where the team stands now:

“We’re 3-3. Our record says we’re an average football team, so it’s still early but we need to get some things fixed.”

On why he thought he was facing a different team in the Browns today:

“It’s a division football game and it’s their home.”

On if they approached the game feeling like they were facing a different Browns team:

“Yeah, I think we had a good plan going in with the right attitude and mindset. I didn’t play well enough.”

On the play of the Browns today:

“They did everything. They won every phase of the game. (QB Brian) Hoyer did a great job of managing them well. They played a complete game and today was their day.”

On why the Browns were so successful with the play-action:

“They did a good job of mixing it up. Mixing in the run and the pass and mixing it up real well keeping us guessing.”

On if there was anything new that the Browns threw at them today offensively:

“They are still a zone running team with play-action off of the zone. The same stuff, but they incorporated a few different things. They are still working their main guys, 44 (RB Ben Tate), 84 (TE Jordan Cameron) and they will mix in 16 (WR Andrew Hawkins) and 19 (WR Miles Austin). They did a good job of spreading the ball around.”

On if they were focused on the offensive performance of the Browns during the second half of the season opener:

“When they get up like that with a 21-point quarter, as a defense, you don’t want to let that happen again. That was our focus. We let that happen. Let’s just get better. The past is the past, let’s just play on and that was out mentality.”