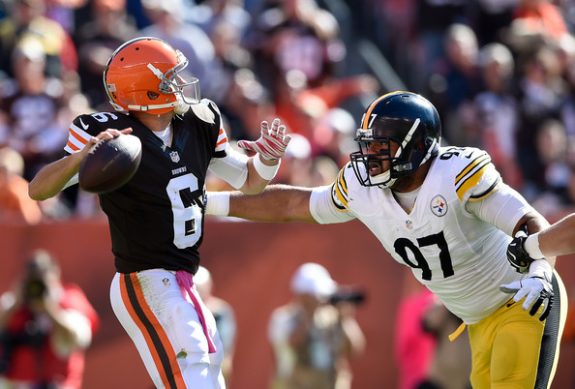 You know that your legendary, dynasty team that haters love to hate and diehards love to love is in real trouble when the opposing quarterback chewed up your defense by completing eight of 17 passes.  It’s also more embarrassing when that quarterback is from another AFC North team and tells the world that he could have caught some nap time at the end of the game.

In his post-game press conference following the 31-10 win on Sunday, Cleveland Browns quarterback Brian Hoyer said, “It was a little boring for me at the end…That might be the fewest pass attempts I had since high school.”

Steelers fans would love to show some Pittsburgh hospitality to Hoyer in the flavor of a tongue-lashing if they didn’t nearly all agree that by the end of Sunday’s game they too were ready to take a nap or pop some Rolaids.  Normally comments made by opponents, such as Hoyer’s obviously snarky remark, would incense Steelers fans into a heated froth.  Not so much this week.

Embarrassing is the word that should be put next to the Steelers’ poor performance.  And while Hoyer’s comments were a little snobbish for a guy who has only led his team to the same number of wins during the 2014 NFL season as the Steelers currently have, who has been the quarterback in games where the Browns couldn’t finish or win, and who did very little before the 2014 season, he’ll probably not receive too much heat for being a bit arrogant.  It is an accomplishment for a Browns player to get a win against the Pittsburgh Steelers – this year, not so much.  That is what stinks in Pittsburgh.  The fact that the beloved team is so mired in mediocrity at this point that Steelers fans don’t even have the energy to pour their hearts out about how wrong Hoyer’s statement is, in their opinion.

Hoyer’s statement should be printed in bold lettering on a poster and tacked up inside the Steelers’ practice facility for the  rest of the season.  Don’t want to be embarrassed by an opponent’s post-game smack talk?  Read the poster and use it to motivate you to not allow one more team or player to say anything similar the rest of this season.

Steelers fans can only wait and see.