Grading The Steelers in Week Six: Epic Fail Against The Browns 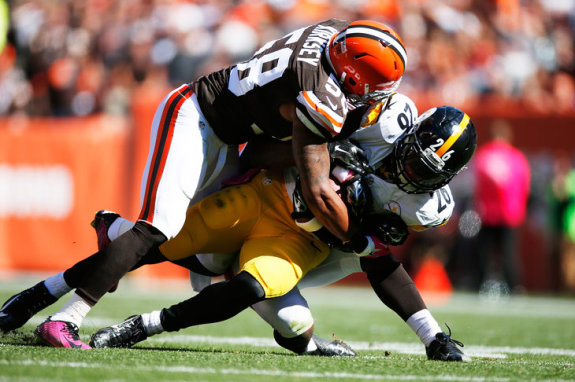 The Pittsburgh Steelers were not ready versus the Cleveland Browns. With bad play-calling, lack of effort and no mental toughness, The Steelers looked out-matched. Their record now stands at 3-3, which is better than last season. There is hope, but the Steelers can not afford another game like Sunday.

No adjustments were made on both sides of the football. The offense lacked consistency and variety. The defense was weak to say the least. Not enough pressure. Dick Lebeau and Todd Haley and Mike Tomlin – the hot seats just got hotter.

Missed opportunities early in the game proved to be costly. Dropped passes and bad play calling. Nobody on the offense played special or stood out. Antonio Brown did not have his usual game of excellence. The running game was decent but it faded as the game went on. Ben Roethlisberger didn’t have a horrible game, but it wasn’t great either with less than 250 yards passing. Grade D-

Not enough pressure.  Not enough aggressiveness. Coverage was flat.  Not enough splash plays. Adjustment was not made to prevent pass plays down the field. The defensive line and linebackers were defeated by the Cleveland Browns front five over and over despite many stunts and blitzes they tried. Brain Hoyer only had to throw 17 passes against the Steelers defense because the game began to get out of hand sooner rather than later. Grade F

No special plays were made on special teams. A botched handle on special teams cost the team three points that changed the momentum of the game. Once again no touchdowns scored in the return game.  Grade C-

To see how Christina Rivers graded this game, click here.