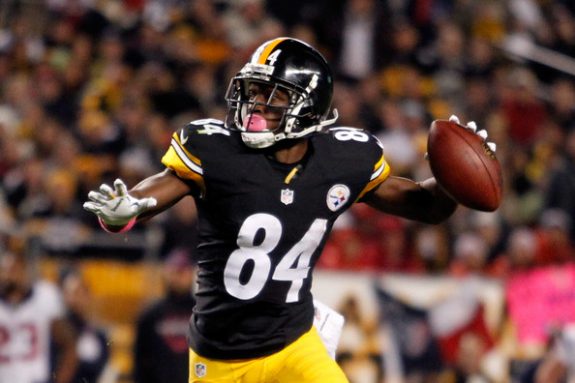 First off, was I the only person that was surprised that Antonio Brown was left handed when he threw a touchdown pass in front of J.J. Watt of the Houston Texans to Lance Moore on Monday Night Football?

Ok, now on to business.

Despite an abysmal beginning to the Heinz Field-hosted Monday night prime-time game, the Pittsburgh Steelers rallied and held on against the Houston Texans.  The day after, fans are still talking about whether or not the Steelers have finally found their identity or not.  Whether or not it’s the offense that the Steelers have been working the kinks out of or the defense that was expected from Dick LeBeau and his defensive coaching staff, the 30-23 come-from-behind win was a major accomplishment deserving of high grades.

Grade A:  The Steelers took advantage of an Arian Foster fumble and turned it into points on the scoreboard.

A defensive takeaway that leads to points is something the Steelers have been lacking in the 2014 NFL regular season.  That ended Monday night.  Instead of settling, the Steelers took advantage.  In fact, the Foster cough-up could be considered the turning point of the game.  After trailing the Texans, 13-0, the Steelers didn’t panic.  It was one of the most exciting momentum swings for Pittsburgh thus far and it’s something the team should use as a film study for the remainder of the season.

“I hope that first quarter’s not who we are,” said defensive end Cam Heyward after the game, “but those other three quarters we were able to get off the field early, put our offense on some short fields. Hopefully we can continue to do that.”

(Note: To read the rest of this piece, use the page navigation below the ad)