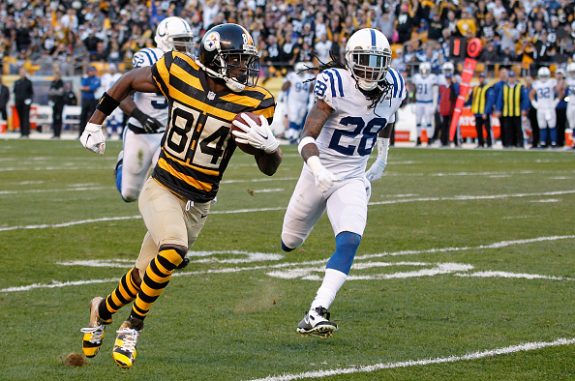 Raise your hand if you saw 51 points, 634 yards of offense, and six passing touchdowns by your starting quarterback coming.

That’s what I thought.

Ben Roethlisberger nearly set an NFL record, falling 36 yards short as he ended the day with an amazing 40-for-49 passing for 522 yards and six touchdowns.

The game was very much like the 2009 shootout with Aaron Rodgers and the Packers, a game that saw Roethlisberger throw for 503 yards and three touchdowns, including a game winning throw on the final play to Mike Wallace.

The Colts to their credit didn’t go away, and a couple Steelers fumbles made a game of it into the fourth quarter.

LeGarrette Blount fumbled at the Colts five-yard line with the Steelers up 42-34 with plenty of time left in the fourth quarter.

Andrew Luck, who was also very good in a losing cause, fell on second down into the end zone, and tried to throw the ball despite not having a receiver in the area.

The official call was a safety, giving the Steelers a 44-34 lead that meant if the Colts were going to rally, they would have to score twice.

The Steelers then put the game away on a drive that ate a lot of clock and yards, and ended with Roethlisberger throwing his 6th score, a pass to TE Heath Miller from 11 yards out to make it 51-34.

In the losing effort, Luck went 26-for-45 for 400 yards even with three touchdowns and two picks, one of which was returned by William Gay for a score early in the second quarter to make it 21-3.

The Steelers wound up scoring 28 in the second quarter, and took a 35-20 lead into the locker room.

The game puts the Steelers at 5-3 on the year, and now on pace for 10 wins after 8 a season ago. It’s the first time they have won back-to-back games in 2013, and sets up a huge game with the Ravens at home next Sunday night.

Colts at Steelers NFL Week Eight Inactives
Between the Hashmarks: Steelers incredible in win over Colts