Between the Hashmarks: Steelers incredible in win over Colts 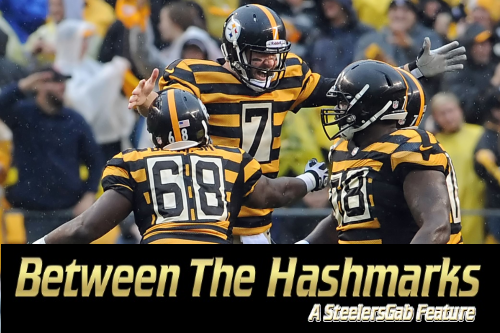 On any other Sunday, Andrew Luck and Ben Roethlisberger would have both thrown their way to victories.  This was Steelers vs Colts week – week eight in the 2014 NFL regular season – and passing wasn’t enough to seal a win.  A total team effort was required as both quarterbacks showed why their consideration as members of the NFL elite is valid.  In what became a 51-34 “W” for Pittsburgh, I’ll look at areas I predicted would help the Steelers earn it and things that could have made all the effort for nothing had the team not pulled together.

If you follow my Steelers articles on KDKA, I wrote earlier in the the week that there were three areas where the Steelers needed to focus in order to be successful and keep the game under their control.  One, forget about last week (week seven). Two, utilize a strong offensive line.  Three, execute the game plan and adjust as necessary.

As for forgetting about the win over the Texans, Antonio Brown got down off his high-horse over the officials saying he stepped out of bounds and reversing a touchdown.  Against the Colts, Brown was not the first target of Ben Roethlisberger.  In fact, Roethlisberger targeted six different players before he hit Brown.  Once Brown saw more one-on-one coverage, Roethlisberger made him the top receiver targeted in the game.  Brown caught 10 of 13 balls thrown his direction for 133 yards and two touchdowns. His longest catch went for 47 yards.

The reason I felt it was important to forget about the Houston game was because every week is like a new set of downs – you start from the beginning.  The Steelers couldn’t afford to blame officials, have a chip on their shoulder and pout over what may have been.  They needed to improve from the outset of the game against the Colts.  Brown accomplished just that, helping Roethlisberger set a franchise record 522 passing-yard, six touchdown and 100th career win.  If Brown had just thrown up his hands in frustration over what he may have done last week – we might not have seen a back-to-back second quarter run of 24 points (or even 28).

As for utilizing a strong offensive line – the Steelers protected Roethlisberger very well against a defense that came in with a decent pass rush but not much star power.  That protection not only aided a running game that opened up the passing lanes, but allowed Roethlisberger to put up six passing touchdowns and not be forced to throw an errant pass that could be picked off.  Mike Adams played well in place of injured Marcus Gilbert, though by the end of the game the entire offensive line looked like they would be glad to hit a hot shower.  They were able to get off the ball and create a pocket, block for rushers Le’Veon Bell and LeGarrette Blount and hold their own.

In trench warfare, the boldest usually win.  This week the Steelers won that battle.

In executing the game plan and adjusting, Pittsburgh showed that even when the momentum swung away from them and the crowd was quieted, they could step back in and make some noise of their own.  In the article, I stated (verbatim), “Coming back 24 points in around three minutes against the Colts would be like Pittsburgh winning the lottery, and no one wants to take that bet.”  Not only did the Steelers take the bet, they doubled-down.  They didn’t need a come-back.  They just opened up their offense after defensive stops and kept moving.  Indianapolis head coach Chuck Pagano looked stunned on his sideline, and for just cause.  He thought he understood Roethlisberger, thought his team was prepared for what would be thrown at them – literally – and watched as his star quarterback (Andrew Luck) tried desperately to pull all the pieces of the Colts team that had won five straight games back together.  It wasn’t enough, and the Steelers had a little luck on their side.

Had the Steelers defense not gotten a safety after Darrius Heyward-Bey caught a pass, stood up because he wasn’t touched “down” and fumbled it away, the Colts may have taken the turnover and put up seven more points.  If the Steelers had kept their hands out of the faces of their opponents, they may have had momentum stay in their favor instead of penalties stalling them out.  The thing is, this game wasn’t one of “what ifs”, but a game of “what will”. That’s a welcome relief after watching the Steelers suck the air out of Pittsburgh fans week after week in games that were winnable.  Mistake after mistake kept the Steelers down.

In week eight, the Steelers had mistakes, but they adjusted appropriately.  The response equaled the level of the error.  They overcame.  They won the game between the hashmarks.  And kudos to them for doing so.